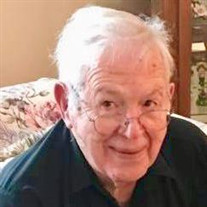 Robert Evans Smith, 86, Leesburg, Florida went to be with the Lord on September 18, 2019 at Waterman Village in Mount Dora, Florida surrounded by his loving family. Robert was born on September 13, 1933 in Parkersburg, West Virginia to his parents Lonnie Hoyt Smith and Anna Ruth Smith. He was a retired Lineman for Florida Power, with over 25 years of devoted service. He and his loving wife moved to Central Florida over 50 years ago from Belpre, Ohio. Robert was a proud Veteran serving in the U.S. Army during the Korean War. He was a member of the First Presbyterian Church of Leesburg, Florida. Robert served as a Past President of the I.B.E.W. (International Brotherhood of Electrical Workers). His is survived by his loving sons, Tom Smith and his wife Sue of Deland, FL, Mike Smith of Tavares, FL, Doug Smith and his wife Sue Ellen of Winnsboro, TX, Jim Smith and his wife Paulette of Longview, TX and Joe Smith of Bear Lake, FL; a loving daughter: Margaret Bennett of Tavares, FL; a brother: Russ Smith and his wife Kay of Vienna, West Virginia; a sister: Barbara Ann Gainer of Belpre, OH; a Sister-In-Law: Doris Smith, Crossland, W.V.; a Brother-In-Law: Richard Wilcoxen of Arizona, ; a Brother-In-Law: David Wilcoxen and wife Linda of Belpre, Ohio; a Brother-In-Law: John Wilcoxen and wife Elizabeth of Tenneesee; a Brother-In-Law: Charles Wilcoxen of Belpre, Ohio; a Sister-In-Law: Sue Wilcoxen and Husband of Denton, Texas; fifteen grandchildren; thirty five great-grandchildren; a great-great-grandson and many, many loving nieces and nephews. Robert is preceded in death by his wife Barbara Wilcoxen Smith, his brother Ronald Smith, sister Mara McKitrick, Brother-In-Law Edward (Pete) Wilcoxen, Son-In-Law Alfred Bennett and Daughter-In-Law Susan Smith. A Celebration of Life Memorial Service will be held on Thursday, September 26, 2019 at Page-Theus Funeral Home Chapel, Leesburg, Florida.

Robert Evans Smith, 86, Leesburg, Florida went to be with the Lord on September 18, 2019 at Waterman Village in Mount Dora, Florida surrounded by his loving family. Robert was born on September 13, 1933 in Parkersburg, West Virginia to his parents... View Obituary & Service Information

The family of Robert Evans Smith created this Life Tributes page to make it easy to share your memories.

Robert Evans Smith, 86, Leesburg, Florida went to be with the...