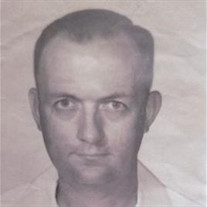 Robert Donald Ricksecker Born: August 26, 1931 Died: July 6, 2020 His parents were Russell and Edna H. Siebert in Chicago, Illinois He was preceded in death by his parents; brothers, Richard and Charles; and his son, Steven George Ricksecker, USN. Surviving members of his family are his beloved wife of 49 years, Pauline Louise (Polly) Ricksecker; son, David Byron Ricksecker; daughter, Susan Pauline Addison; two grandsons, two granddaughters, three stepsons, their children and several great grand children. Bob enlisted in the Navy in 1947. He had always been interested in airplanes and could identify many aircraft by thei silhouettes. His first duty station was at Lakehurst Naval Air Station and he was assigned to duty on a blimp. He had many funny stories about that. He loved the Navy and made rank very quickly and he achieved his Senior Chief Status. He served in many areas including Vietnam on the USS Shangrila. He had many tales about flying into typhoons and hurricanes. After he retired in 1974, he owned and operated Bob's Model Market in Leakey, Texas for 10 years, bought a small ranch and raised some livestock. His next job was working for the U.S. Custom Service as an Aviation Inspector for several of the contractors assigned to service the planes for the United States Customs Service, he had many stories about drug trafficking and camouflage. Several service clubs benefited from his membership. He was a life member of the Leakey Masonic Order and served as president. One wish on his bucket list came true when he and his wife spent 2 1/2 years in their RV and traveled to 48 states. On one four month trip to Alaska, he drove 14,000 miles. Bob was a very wonderful husband and father. He could best be described as a true gentleman and a gentle man. He had a wonderful sense of humor and made life a joy. Arrangements are entrusted to Page-Theus Funeral Home and Cremation Services, Leesburg, FL

Robert Donald Ricksecker Born: August 26, 1931 Died: July 6, 2020 His parents were Russell and Edna H. Siebert in Chicago, Illinois He was preceded in death by his parents; brothers, Richard and Charles; and his son, Steven... View Obituary & Service Information

The family of Robert D. Ricksecker created this Life Tributes page to make it easy to share your memories.

Send flowers to the Ricksecker family.