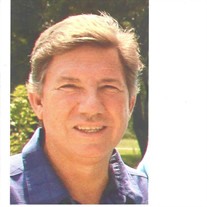 Robert Preston Pope, age 57, of Howey-In-the-Hills, Florida, was born, April 28, 1959, in Orlando, Florida. Bob went to be with the Lord on September 17, 2016. Bob grew up in Orlando, graduating from Colonial High School and Valencia Community College. He was a loving son, husband, father, brother and uncle. Bob had a long career with The Walt Disney Company and Walt Disney Imagineering, and was instrumental in Park openings and new projects. Later he owned his own company focusing on zoo projects across the country. Bob loved his family, and was very proud of their accomplishments. He umpired Little League and ran scoreboard for athletic events at his daughter's school, First Academy of Leesburg. He recently found fulfillment in operating the media productions for his church, First Baptist Church, Leesburg. Bob was an avid sports enthusiast, played basketball, showed horses, and found joy attending his daughter's sports events, dance and cheer competitions. Bob is survived by his wife Deborah, daughters Haley and Lillie, mother Barbara and brother Bill Pope (Mary). Also surviving are nieces Rachel, Rebecca and nephew Ryan. He was preceded in death by his father William R. Pope. Visitation with the family will be at the funeral home Saturday, September 24, 2016, from 10:00 AM to 11:00 AM with Memorial Services starting at 11:00 AM in Page - Theus Funeral Home, 914 West Main Street, Leesburg. In lieu of flowers donations may be made to Cornerstone Hospice, 2445 Lane Park Road, Tavares, Florida 32778 or Men’s Christian Care Center, 220 N.13th Street, Leesburg, Florida 34748

Robert Preston Pope, age 57, of Howey-In-the-Hills, Florida, was born, April 28, 1959, in Orlando, Florida. Bob went to be with the Lord on September 17, 2016. Bob grew up in Orlando, graduating from Colonial High School and Valencia Community... View Obituary & Service Information

The family of Robert Preston Pope created this Life Tributes page to make it easy to share your memories.

Send flowers to the Pope family.