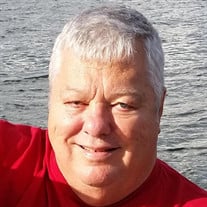 ROBERT OWEN BORCHARDT August 7, 1942 – May 8, 2020 Robert (Bob) Borchardt, devoted husband, father and grandfather, passed away on May 8th, 2020. Bob was born in Chicago, IL to the late Raymond and Agnes Borchardt. He is survived by his loving wife Donna Thompson, his children Deborah (Lawrence) Brannen, Dawn Kirby, and Robert Borchardt; step children Rebecca Thompson, Steven (Tracy) Thompson, and Lori Thompson; grandchildren Thomas Brannen, Hillary Brannen, Grace Brannen, William Brannen, Shawn Kirby, and Jesse Kirby, and sister Pam Borchardt and nephew Joe Borchardt. He graduated from Proviso East high school, Melrose Park, IL. Bob lived much of his life in Wheaton, IL Bob began working for Joyce Beverages (7-UP), West Chicago, IL, in his teens. He stayed with the company for over 40 years, through several name changes and locations in the suburbs of Chicago. He was admired and very well known during his tenure with the company. He began helping on a truck and with hard work and determination he was promoted to District Manager, then Division Manager, and eventually a Brand Manager. He won many contests and earned many accolades throughout his career. He retired in 2004 in Northlake, IL. Upon retirement, he fulfilled his dream and moved to Minocqua, WI with his wife, Donna. Together they spent their evenings on the lake fishing and days playing cards. The Northwoods of Wisconsin was his favorite place. In order to escape the cold winters, they bought another home in Leesburg, FL where they made many friends and enjoyed the warm sunshine. Bob was always larger than life. He was a masterful storyteller, and loved to entertain an audience. Bob enjoyed fishing, cooking, landscaping, playing cards, golfing,and family vacations in Minocqua. His friends will always remember his love of life and passion for hosting dinner parties. His family will have stories to retell for generations to come. A Celebration of Life will be held at a later date. Online condolences may be shared at pagetheusfuneralhome.com in Leesburg, FL.

ROBERT OWEN BORCHARDT August 7, 1942 &#8211; May 8, 2020 Robert (Bob) Borchardt, devoted husband, father and grandfather, passed away on May 8th, 2020. Bob was born in Chicago, IL to the late Raymond and Agnes Borchardt. He is survived by... View Obituary & Service Information

The family of Robert Borchardt created this Life Tributes page to make it easy to share your memories.

Send flowers to the Borchardt family.