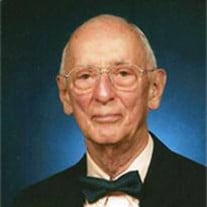 Raymond B. Poet, 92, joined his beloved late wife Ruth in eternal rest on December 7, 2012. They had been married over 69 years. He passed away surrounded by his loving family-daughter Renee M. Poet, Son Raymond H. Poet, and his wife Janet K. Poet, all of Connecticut. He was born in Portchester, NY the son of Henry and Henrietta (Guigou) Poet. He was educated in New York City schools and graduated from City College of New York, after which he served in WW II in the U. S. Army Air Force working with a secret resource called “Radar”. During the war he was stationed in Florida, Colorado, Nebraska and Alaska as well as other places. Later he resumed his career as a research chemist and spent most of his time with the pharmaceutical company E. R. Squibb and Sons in New Brunswick, NJ where he worked for over 30 years. Following his retirement he worked for several years as a consultant to the same company. Later he became a long time Florida resident, having lived in Crystal River for over 15 years and at Lakeport Square in Leesburg, Florida since 2003.For his entire life the most important thing to him was a devotion to and enjoyment of his family. Besides his children he is survived by 2 grandchildren, Matthew and Jonathan of CT, and Philadelphia respectively, their wives Tina and Dana and 3 great-grandchildren, Dylan, Jake and Margot. He was a member of Morrison United Methodist Church in Leesburg and had previously been a member of Methodist churches in Crystal River and in NJ. Over the years he was active in various civic and other organizations such as AARP and the Boy Scouts and at one time served on a local Board of Education. He was also a longtime member of the American Chemical Society. Other hobbies over the years included travel, gardening, salt water fishing, woodworking and carving, and reading. He was a modern day “renaissance man” with deep interest in and knowledge of many varied subjects such as science, art, music, politics, history, etc…Friends are invited to call at Page Theus Funeral Home in Leesburg on Wednesday December 12 from 9:45 A. M. to 10:45 A. M. A private funeral service will be held by the family. In lieu of flowers donations may be made to the Morrison United Methodist Church Scholarship Fund, 1005 W. Main Street, Leesburg, Florida 34748.l

Raymond B. Poet, 92, joined his beloved late wife Ruth in eternal rest on December 7, 2012. They had been married over 69 years. He passed away surrounded by his loving family-daughter Renee M. Poet, Son Raymond H. Poet, and his wife Janet K.... View Obituary & Service Information

The family of Raymond B. Poet created this Life Tributes page to make it easy to share your memories.

Send flowers to the Poet family.