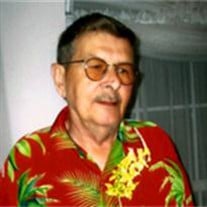 Ralph Alton Gauvin, age 74, of Leesburg, FL., and Formerly of Norwich, CT. and Poquoson, VA., passed away on September 23, 2011, of lung cancer. Born in New London, CT., he is survived by his wife, Susan and two children, Joey and Anna and eight grandchildren; by sisters Thelma Landry-Mellow and family of CT. Virginia Spencer & family NC; brothers Paul Gauvin and family of CT., and Stephen Malley & family of TX. There was an older brother, Ernest Gauvin who is now deceased.Ralph had been a resident of Leesburg in Pennbrooke Fairways community for the last 13 years, working part time as a gate greeter for seven years. He moved to FL from Poquoson, VA., after eighteen years in civil service as an auto mechanic at Langley AFB, VA. Before that he worked at NN Shipbuilding & Drydock Co. in Newport News, VA., and at Electric Boat, Groton, CT.Ralph was in the Air Force (1955-59) stationed at Langley AFB when he met Susan Gillespie. They were married on Aug 23, 1958, and celebrated 53 years of marriage, having a son Joseph Pierre (Stephanie) of Winsor, VA., and a daughter Anna Land (Christopher) of Poquoson, VA., and an addition of eight wonderful grandchildren and one great granddaughter.Ralph did a lot of work for the Tabernacle United Methodist Church, Poquoson, VA. His work carried on to the Lee Memorial United Methodist Church in Norwich, CT., and Morrison United Methodist Church in Leesburg, FL. He was also a Moose Club member.Ralph was a happy guy, never running out of anything to say, and was much loved by all of his friends. He loved doing things for all folks when they needed it. He never hesitated, very seldom waiting for the friends or acquaintances to ask.A Memorial Service will be held on Monday, October 3, 2011 at 11:00am at Morrison United Methodist Church in Leesburg. Inurnment will be at Florida National Cemetery after the services. In Lieu of flowers donations may be made to Morrison United Methodist Church, 1005 W. Main Street, Leesburg, FL 34748. Arrangements entrusted to Page – Theus Funeral Home, Leesburg, FL.

Ralph Alton Gauvin, age 74, of Leesburg, FL., and Formerly of Norwich, CT. and Poquoson, VA., passed away on September 23, 2011, of lung cancer. Born in New London, CT., he is survived by his wife, Susan and two children, Joey and Anna and eight... View Obituary & Service Information

The family of Ralph A. Gauvin created this Life Tributes page to make it easy to share your memories.

Send flowers to the Gauvin family.