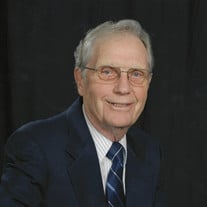 Norman George Anderson, 91, went to be with his Lord at home on Sunday, June 25, 2017. He was born in Chicago Illinois, July 12, 1925 to parents Theodore and Eva Anderson. He resided and attended schools in that area until age 18. Enlisting in the US Army Air Corps in 1943, he served two and one half years. He attained the rank of 2nd Lieutenant as a Bombardier/Navigator Central Fire Control Officer as a member of a B29 crew. After WWII he returned to the Chicago area where he attended the National College of Chiropractic and Naturopathy. In 1950 he graduated with degrees DC and ND. On May 11, 1951 he married Agnes Dorothy Batstone in Worcester MA. They moved to Boulder, Colorado where in practiced for three years. In 1953 they relocated to Brattleboro, Vermont where he practiced his profession for 33 years. He served as president of his professional association for two terms. Appointed to the State of Vermont Board of Chiropractic Examiners by three Vermont governors, he served three year terms each appointment. Along with his wife they were involved in a Bible Study Group which later became Community Bible Chapel. His children saw him as much as a pastor as they did a chiropractor in his life’s work. In 1986 he and his wife retired to South Florida where they lived for 8 years. In his retirement he became a consultant to Florida physicians with the neutraceutical company Douglas Laboratories. In 1994 they moved to Leesburg, Florida. Becoming members of Leesburg First Baptist Church he was involved in teaching and counseling men’s groups. For seven summers in retirement, he and his wife were privileged to travel in their motor home. They traveled all 48 contiguous states and the ten provinces of Canada visiting many relatives and friends. He is survived by his loving wife, Agnes, of sixty-six years and his loving family Dr. Craig Anderson (Barbara), Brattleboro VT; Janice Anderson, Leesburg FL; Jeffrey Anderson (Kimberly), So Burlington VT; his sister Shirley Nelson, High Point NC; and four grandchildren: Rev. Steven Anderson (Sarah), Littleton CO; Kristin Anderson, East Granby CT; Mark Anderson (Justine), Vernon VT; Olivia Anderson, Chapel Hill NC and four great grandchildren: Jaycie Lane Anderson, Lia Nichole Anderson, Wadely Steven Anderson, William Norman Anderson; and many loving nieces and nephews. Funeral services will be held on Saturday, July 1, 2017 at 11:00 a.m. at Page-Theus Funeral Home, Leesburg FL with a visitation to be held from 10:00 a.m. until the hour of services. On line condolences and memories may be shared by visiting www.pagetheusfuneralhome.com. In lieu of flowers donations may be made to the First Baptist Church Christian Care Center, 115 No Thirteenth St, Leesburg FL 34748, christiancarecenter.org; or Compassionate Care Hospice, 214 E. Washington St, Ste. C, Minneola FL 34715

Norman George Anderson, 91, went to be with his Lord at home on Sunday, June 25, 2017. He was born in Chicago Illinois, July 12, 1925 to parents Theodore and Eva Anderson. He resided and attended schools in that area until age 18. Enlisting... View Obituary & Service Information

The family of Norman George Anderson created this Life Tributes page to make it easy to share your memories.

Norman George Anderson, 91, went to be with his Lord at home...

Send flowers to the Anderson family.