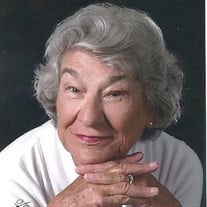 Norma Catherine Robissa, 90, went to be with the Lord on March 25, 2015. Norma was born on February 17, 1925 in New York City to her parents Michael and Marie Zorawick. Norma, formally a resident of Oyster Bay, NY moved to Leesburg, FL in 1997 from North Miami, FL. She graduated from Hunter College in New York City and then later graduated from Johns Hopkins University in Baltimore, MD with a Bachelor’s of Science and a degree in nursing. Norma was a registered nurse for over thirty years and in 1987 was chosen to administer clinical research studies for pain management at Beekman Downtown Hospital in New York. She was also a Sunday school teacher for over ten years in Oyster Bay, NY. Norma was an active member of the Christian community in Leesburg and a devoted leader of her bible study group where she lived. With her husband, Norma travelled the world on various Goodwill and Missionary adventures around the globe. She was an active member of the Royal Highlands community where she lived and enjoyed participating in all the activities they had to offer. Norma was a member of the bridge club, director of the theater group, dedicated member of the choirs, leader of the travel club and when she lived in NY she was the leader of the Girl Scouts of Nassau County, NY. She also had many hobbies. Norma enjoyed Traveling, knitting, performing, cooking (She made the best meatballs), and in her later years she enjoyed painting. Mrs. Norma Catherine Robissa is predeceased by her loving husband of 58 years: Rudolph Robissa and Daughter: Regina Kim Robissa. She is survived by her Son: Rod (Gunilla) Robissa, of Kings Park, NY; Daughters: Robin (F. McTier “Mack”) Halsey, of Charlottesville, VA, and Roxanne (Scott) Wilson, of Glenmont, NY; Brother: Reverend Joseph (Lois) Zorawick, of New York, NY; Grandchildren: Heather (Derek) Halsey Seig, Coe (Fiancé Laura Bader) Wilson, Quinn Wilson, and Norah Wilson; and Great-Grandchild: Shepherd Seig. Norma touched many lives and will be deeply missed. Her family would like to express their most heartfelt thanks to her countless friends and neighbors who were so kind, caring and supportive during her final months. A Funeral service will be held on Saturday March 28, 2015 at 4:00 PM at Page-Theus Funeral Home. A visitation will be held prior to the service from 3:00 – 4:00. In lieu of flowers donations may be made to Cornerstone Hospice on line at http://cshospice.org/ or by phone at 1888-728-6234. Services have been entrusted to Page-Theus Funeral Home, Leesburg, FL. On line condolences and memories may be shared by visiting www.pagetheusfuneralhome.com.

Norma Catherine Robissa, 90, went to be with the Lord on March 25, 2015. Norma was born on February 17, 1925 in New York City to her parents Michael and Marie Zorawick. Norma, formally a resident of Oyster Bay, NY moved to Leesburg, FL in 1997... View Obituary & Service Information

The family of Norma Catherine Robissa created this Life Tributes page to make it easy to share your memories.

Norma Catherine Robissa, 90, went to be with the Lord on March...

Send flowers to the Robissa family.