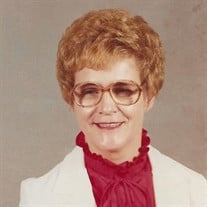 Norma Emily Bloom March 28, 1936 to May 10, 2019 Norma Emily (Hull) Bloom was born to Gertrude (Taylor) and Chandler Hull on March 28, 1936. She is the last sibling to step over to the other side of life. She was looking forward to meeting up with her husband Robert and all of her family, who have all gone before her. Norma met Robert W. Bloom at the Coffee Cup Restaurant in downtown Yale, were she was waitressing, which was owned by her parents at the time. Robert was stationed at the Air Force Base in Port Austin. Her aunts knew of Robert from their bowling tournaments and told him about Norma. They were married May 16, 1955, and were blessed with four children whom all were married within 16 months of each other. Robert (Bob) married Cindy Houle in 1978, Andy married Cheryl Ramage in 1978, Susan married Jerry Hansman in 1977 and Lori married Dennis Stamper in 1978. Eight grandchildren were the next to expand this family, followed by 11 great-grandchildren. Norma focused on raising the children, while Robert worked at the Yale Post Office. After her children grew up, she worked at the Yale High School as librarian, which she enjoyed very much. She also oversaw a class that she affectionately called her “Sweat Hogs”. They all enjoyed their time together and even years later, the students, upon meeting up with her, would tell her how they would always remember her and that class. Norma became quite the golfer and it wasn’t long before Robert joined her. In 1990 after retiring they moved to Wildwood, Florida so they could golf year-round. Robert passed on in 2011 and now, May 10, 2019, they are together again 6 days before their 64th Anniversary. They will rest together at the Florida National Veterans Cemetery in Bushnell, Florida.

Norma Emily Bloom March 28, 1936 to May 10, 2019 Norma Emily (Hull) Bloom was born to Gertrude (Taylor) and Chandler Hull on March 28, 1936. She is the last sibling to step over to the other side of life. She was looking forward to meeting... View Obituary & Service Information

The family of Norma Emily Bloom created this Life Tributes page to make it easy to share your memories.

Send flowers to the Bloom family.