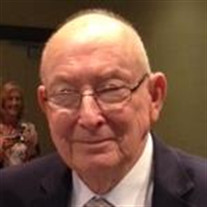 Carl Norman “Norm” Brocker age 85 passed away early Wednesday, September 07, 2016 in Wildwood, Florida. Norm was born in Grand Rapids, Michigan and moved to The Villages, Florida in 2000 from Newago, Michigan, after his retirement from the Steelcase Company where he was a Tool and Die maker for over 26 years. Norm was a proud Army veteran who served in the Korean War, discharged as a Corporal Technician earning an Occupational Medal and a National Defense Service Medal. He held life memberships with the American Legion Post 347 in Lady Lake, and the Veterans of Foreign Wars Post 8083 in Belleview, Florida, and he was a member of the Knights of Columbus. Norm was known by those closest to him for his open friendliness, and his big heart. He was always a person who would step up to help someone in need. He also loved building and fixing things and he was happiest when he was spending time in his workshop. His mechanical background made him a jack of all trades and there was no project that he was afraid to take on. He was an avid hunter and fisherman and at one time he collected antique tractors when he lived in Michigan, accumulating a total of 16 at one time. He was preceded in death by his parents, Ferdinand Brocker and Lucille Keller, and brother Raymond Brocker. He is survived by his loving wife of 25 years Geri; brother – Ken Brocker of Pierson, MI; sister – Carol Warner of Wayland, MI; step-children – Dr. Richard Held II (Julie) of Harbor Hills, FL; and Robin (Steve) O’Dette of Rockford, MI; nephews – Dan Brocker of Washington State; Tom Brocker of Newago, MI; Scott Brocker of Colorado; Matt Warner of Wayland, MI; and Andy Warner of Middleville, MI; nieces – Deb Deloof of Middleville, MI; and Kim Shottock of Cedar Springs, MI; and 6 grandchildren - Jake, Gabrielle, Kennedy and Thomas O'Dette and Alexandra and Brendan Held. Memorial Contributions in Norm's memory may be made to the Alzheimer's Association in lieu of flowers. An Inurnment Service with military honors is planned for 1:00 P. M. Wednesday – September 14, 2016 at the Florida National Cemetery in Bushnell, Florida. Page-Theus Funeral Home and Cremation Services has been entrusted with all arrangements.

The family of Norm Brocker created this Life Tributes page to make it easy to share your memories.

Send flowers to the Brocker family.