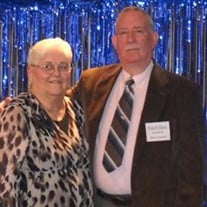 Murdoch Angress Shaw Jr, 80, of Fruitland Park, FL., passed away on February 24, 2022. Murdoch was born on April 2nd, 1941 in Mulberry, FL., to the late Thelma and Reverend Murdoch Angress Shaw Sr. Murdoch graduated from UF with an Architect degree. He went on to marry the love of his life Marilyn, at the Methodist church in Eustis, FL, with his father the Reverend Murdoch Shaw Sr officiating the wedding. They were happily married for 50 years until her passing in 2015. Murdoch was very active in youth programs, he coached Fruitland Park Cap League, and Fruitland Park Dixie Youth League, and did everything Marilyn asked him to do for the Boy Scouts of America. One of his first designs as an Architect was the Welcome Center for Leesburg, which has since been converted to a restaurant called "Legends". Murdoch really enjoyed attending gun shows and was an advocate for gun rights. He also loved history, trains, and obtained his pilot's license from the Leesburg Airport. He had a very successful architecture business in Leesburg most of his life, and later went to work for the Department of Corrections, and A.C.H.A. performing building inspections for prisons and hospitals. Murdoch has led a very accomplished life, and was a true asset to his community. He will be truly missed by everyone that knew him. Murdoch is survived by his two sons, Murdoch A Shaw III (Robin Smith) of Leesburg, FL., Marc Owen Shaw, of Weirsdale, FL; one grandchild, Michael Anthony Shaw (Tiphany) from Tavares, FL; three great-grandchildren, Madison, Jacob, and Trevor; and a host of numerous family members and friends. Murdoch is preceded in death by his loving wife of 50 years, Marilyn; and his parents Thelma and Murdoch Shaw Sr. The family of Murdoch will be receiving guests at Page-Theus Funeral Home on Sunday March 6, 2022 from 9:00 AM to 10:00 AM, immediately followed by a funeral service at 10:00 AM. There will be a Committal Ceremony at Shiloh Cemetery in Fruitland Park following the funeral. In lieu of flowers, the family would appreciate donations made on Murdoch's behalf to the Florida Architect Foundation, or any Local Youth sports Foundation. Arrangements are entrusted to Page-Theus Funeral Home and Cremation Services, Leesburg, FL.

The family of Murdoch Angress Shaw Jr created this Life Tributes page to make it easy to share your memories.

Send flowers to the Shaw family.