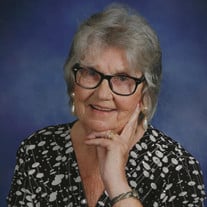 Miriam Jane Curtis Walldroff of Leesburg, Florida went to be with the Lord on December 11, 2019 at the age of 91. She was born April 20th, 1928 in Rochester, New York to Samuel and Amelia Curtis of Chili, NY. Miriam was a piano student at Hauchstein School of Music and a voice and organ student at Eastman School of Music both in Rochester, NY. She performed in many churches in Rochester playing the organ and solo work. She had dedicated her life to using her talents to the Lord. She was in the Aretoria Society and and sang solos for Youth for Christ in Rochester. Miriam was an Alumni of Bob Jones University in Greenville South Carolina. She was married to the Rev. Edward VanWicklin in 1949. Together they reopened the Calcium Community Church in Calcium and it has been open continuously since then. They also served other churches in New York State and Pennsylvania. Rev. VanWicklin is deceased. Years later she married William Gleason of Webster, New York. He died of Cancer in 1986. In 2000, she met her childhood sweetheart she had not seen in 53 years, William A. Walldroff of LaFargeville, NY. They were married on June 2nd, 2001. They had many happy years together before he was tragically killed in a truck accident at Gunns Corners. Miriam gave private piano, voice and organ lessons. She was a member or Eastern Star and of the St. Mark’s Lutheran Church in Leesburg, Fl. She is survived by her brother and sister-in-law Harold and Hariette Curtis, Evans Mills and three nephews; Robert (and Kathy) Curtis, Theresa, David (and Marilyn) Curtis, Delmar and Peter (and Colleen), Evans Mills. Also surviving are five of Bill’s sons; Edward and Anne, Wendell and Donna, Marcus and Rita, Larry and Mary, Glen and his companion, Rita Ogburn, all of LaFargeville; two daughters and a brother-in-law, Debra and David Schryver of Fishers Landing and Charlotte Walldroff of LaFargeville; and a daughter-in-law; Janet Walldroff of LaFargeville. Bill’s son David predeceased Miriam. Miriam requested only a grave side service but due to the weather, a short service to celebrate her life and a time to greet family will be held at the Agape House in LaFargeville on Tuesday, December 17th at 1:00 pm followed by internment at the side of her husband in Grove Cemetery, in LaFargeville. Arrangements are by Page-Theus Funeral Home in Leesburg Florida and Fredrick Bros. of Theresa, NY. In lieu of Flowers, donations may be made to the Grove Cemetery of LaFargeville, NY or St. Mark’s Lutheran Church in Leesburg, Fl.

Miriam Jane Curtis Walldroff of Leesburg, Florida went to be with the Lord on December 11, 2019 at the age of 91. She was born April 20th, 1928 in Rochester, New York to Samuel and Amelia Curtis of Chili, NY. Miriam was a piano student at Hauchstein... View Obituary & Service Information

The family of Miriam Jane Curtis Walldroff created this Life Tributes page to make it easy to share your memories.

Miriam Jane Curtis Walldroff of Leesburg, Florida went to be...

Send flowers to the Walldroff family.