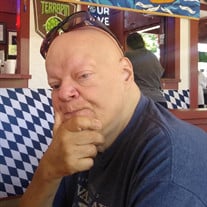 Michael A. Medeiros Sr., 61, Wildwood Florida, passed away peacefully on December 3rd 2021, with his loving wife Christel by his side, at Cornerstone Hospice, Lady Lake, Florida. Michael was born in Hartford, CT to his parents Eugene J. & Ruth M. Medeiros. He attended Enrico Fermi High in Enfield, CT an began a career in the Sales Department of the Journal Enquirer Newspaper, Vernon, CT His love for the sports of baseball made him decide to open a Baseball Memorabilia Store in Enfield, which began his entrepreneurship in many different aspects. About 30 years ago he founded, together with his best friends, the Fantasy Baseball League Al Nero, in which he actively participated to the very end. Along with his wife he enjoyed visiting many Minor League Baseball Games as well as attending many Nascar Races. Many years ago, moving to Florida, he opened together with his late Mother, a Ceramic Shop "Huggie Bear", named due to his passion of collecting White Teddy Bears. At the same time he enjoyed very much being a Baseball Coach for the Youth Bellview team, in which his three sons actively participated. Michael's favorite time of the year was Christmas and he enthusiastically assisted with the Toys for Tots Operation, within his late father's Marine Corps League Detachment. Michael, together with his wife Christel, loved traveling the country, here and abroad, especially on a cruise ship and, of course, visiting the "Mouse's House". He called himself a "Mouse-a-holic" to the point that even his beloved dog was named Mickey. Michael is survived by his loving wife Christel (Link) of more than 18 years of marriage, and his proud three sons, Michael Jr. , Anthony and Adam and their spouses as well as many Grandchildren, nieces, nephews and cousins. He will be remembered by all, for his sense of humor, his caring nature, loyalty and love for his devoted wife Christel and love ones and a lifetime of friends. Funeral Service will be held on December 11th, 2021 at 11AM at Page-Theus Funeral Home, 914 W. Main St. Leesburg, Florida. For anyone who is unable to attend the services at the funeral home, you may watch a live stream of the services by following the link below: http://webcast.funeralvue.com/events/viewer/64773/hash:464EB0A4A0CBBDCC

Michael A. Medeiros Sr., 61, Wildwood Florida, passed away peacefully on December 3rd 2021, with his loving wife Christel by his side, at Cornerstone Hospice, Lady Lake, Florida. Michael was born in Hartford, CT to his parents Eugene J. & Ruth... View Obituary & Service Information

The family of Michael A. Medeiros Sr created this Life Tributes page to make it easy to share your memories.

Send flowers to the Medeiros family.