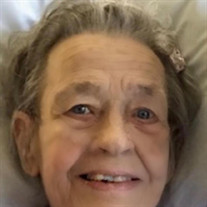 Mary Elizabeth Jackson age 76 of Winter Garden, FL. She was born in Gallatin, Tennessee one day after the bombing of Pearl Harbor to the late Malcolm Blondy Vaughan and the late Mildred Athenese Keith Vaughan. The story goes, Mary’s mother was so shaken by the bombing that she “dropped” Mary the day after. She was preceded in death by her husband Leonard Edward Jackson, her brother George Vaughn (Linda), her brother David Vaughn, her half sister Frances Brown, and her half-sister Patricia Murphy. She is survived by her daughter, Mary Lucinda Wilson, (James Eugene) & son Raymond Malcolm Jackson (Missa). She is also survived by 8 grandchildren and several great-grandchildren as well as her sister, Maxine Rather (M.C.), her half-brother, Harvey Thaxton (Connie), and several nieces and nephews. Mary was an excellent LPN and prior to that a well loved school bus driver for the Sumner County, TN school system. In addition, she and her husband farmed for years and raised many crops of tobacco. It was Mary’s wish that no service be held. She frequently said, “I don’t want anyone standing over a casket and crying over me, nor over a grave.” “If you are going to bring me flowers, do it while I’m alive and can still enjoy them.” So, per her wishes, there will be no service and her body will be cremated. In lieu of flowers for her, please send some to someone you love that is still living so they can enjoy them or perhaps make a donation to your favorite charity in her memory. She was a strong, capable woman who was loved dearly by all who encountered her. She will be deeply missed. Page Theus Funeral Home and Cremation Service, 914 West Main Street, Leesburg, Florida. On line condolences to the family at www.pagetheusfuneralhome.com

The family of Mary Elizabeth Jackson created this Life Tributes page to make it easy to share your memories.

Send flowers to the Jackson family.