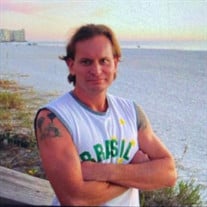 Mark S. Williams, 54, Ridge Manor, Florida passed away suddenly at his residence on April 24, 2022. Mark was born on April 20, 1968 in Wiesbaden, Germany to his parents Robert E. Williams and Judy Ann (Bercini) Williams. Mark moved to Ridge Manor, Florida over 30 years ago from Key West, Florida and Marco Island, Florida. He was of the Christian faith. Mark suffered from hereditary spastic paraplegia, a debilitating disease that causes leg muscle spasms and shaking uncontrollably. He tried all kinds of treatment, but nothing really worked well. A dear friend commented, “It was hard to watch when these attacks hit him usually when he was trying to walk, but he just powered through pain and all. Mark told his friend a long time ago, he knew this was coming when he got older, his father had the same disease and so Mark told me that’s why he tried to live a full life while he could. He liked to say, “If you are not living on the edge, you’re taking up entirely too much room”, and then he would follow that with his cackling laugh. He lived life at the extreme, he loved skydiving, building computers and other techno gadgets and he traveled the world across Europe and Africa. He belonged to H.S.P. (Hereditary Spastic Paraplegia) a Group where he became familiar with this disease that he heroically battled. He was a proud veteran who served in the United States Navy fixing F/A 18 Hornets before his IT career. He was the most amazing guru on the U.S. Postal Service computer network, he fixed things before they broke and usually before other employees arrived at work. He ran all the networks across Suncoast district, west central FL down to Naples. Mark was so talented he got a job at the main Postal Networks in Raleigh NC. At this point he was helping run the postal networks in the whole country. He was the kind of guy that would do anything for a friend, if you needed something he would come running. He was such a character, Mark had always said the he learned his vocabulary in the navy. He had such a big heart, over the years he rescued/adopted a bunch of cats, which he loved and took amazing care of them. Mark is survived by his loving mother: Judy Ann Meagher of Naples, FL; his uncle: Gerald Bercini of Naples, FL and several close dear friends. He was preceded in death by his beloved father, Robert E. Williams and a half-brother and half-sister, Mike Williams and Dianne Dolan who kept in touch for numerous holidays and weddings. As per Mark’s wishes there will be no public services at this time. Burial will take place at a later date at Florida National Cemetery, Bushnell, Florida. Online condolences may be shared by visiting www.pagetheus.com.  Arrangements are entrusted to Page-Theus Funeral Home and Cremation Services, Leesburg.

The family of Mark S. Williams created this Life Tributes page to make it easy to share your memories.

Send flowers to the Williams family.