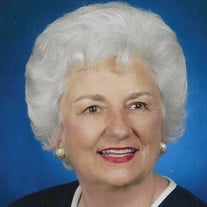 Margaret L. “Peggy” Finger, 82, Ocala, Florida formerly of Leesburg, Florida went to be with the Lord on August 25, 2018 at Brandley Hospice House in Summerfield, Florida under the loving care of her family and staff of Hospice. Peggy was born on December 2, 1935 in Yonkers, New York to William H. Losee and Margaret (Seymour) Losee. Peggy was a graduate of Fairleigh-Dickinson University with a degree in nursing. After marrying Bill Finger in 1956, she and Bill moved to Lakeland and then moved to Ocala 1961. In 1975 they moved to Leesburg and in 1981 moved to Dallas, Texas. In 1983 they relocated back to Ocala. Peggy was a Retired Registered Nurse who worked and volunteered at Munroe Regional Medical Center and in other areas of healthcare. Peggy also volunteered for the Gideons. She is survived by her three daughters: Cindy Sparrow of Reddick, FL, Celia Sattizahn of Leesburg, FL and Peggy F. Close (Roland) of Leesburg, FL; six grandchildren: Kristi Owens (Tommy), Carrie Williamson, Abby Jones (Ross), John Mark Close, Jacob Close (Tara) and Joseph Close (Katie); nine great-grandchildren and many nieces and nephews. She was preceded in death by her parents, a sister and her husband, Bill H. Finger. Visitation will be held on Friday, August 31, 2018 from 5:00PM to 7:00PM at Page-Theus Funeral Home, Leesburg, Florida with a Graveside Service on Saturday, September 1, 2018 at 10:00AM at Hillcrest Memorial Gardens, Leesburg, Florida. In lieu of flowers the family has requested donations be made to Brandley Hospice House in Peggy’s memory. A memorial service will be held in Ocala at a later date. Online condolences may be shared by visiting www.pagetheus.com.

&#8239; Margaret L. &#8220;Peggy&#8221; Finger, 82, Ocala, Florida formerly of Leesburg, Florida went to be with the Lord on August 25, 2018 at Brandley Hospice House in Summerfield, Florida under the loving care of her family and staff of Hospice.... View Obituary & Service Information

The family of Margaret L. "Peggy" Finger created this Life Tributes page to make it easy to share your memories.

Send flowers to the Finger family.