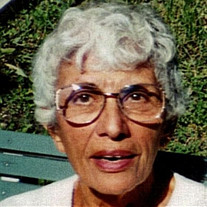 Margaret Ann (Alongi) DeMolli, 94, died on Friday, October 10, 2014, in Leesburg, Florida. Marge was born March 15, 1920, in Rockford, Illinois. On June 27, 1942, she married Louis Joseph DeMolli with whom she had one son Louis Joseph DeMolli, Jr. She had various hobbies including cooking Italian food for large groups, bowling, golf, playing cards, collecting turtle figurines and playing bingo. She would spend her free time knitting slippers and sweaters for her relatives while she watched the Lawrence Welk show. She worked as a secretary for Nelson and Nelson attorneys then worked at Pierce Packaging, Inc., in charge of international shipping for several years in Rockford, Illinois. She was well liked and respected by her peers and developed many great relationships over the years. She is survived by her son Louis Joseph DeMolli, Jr., her two grand-children Michaelle (DeMolli) Stirratt and Ryan DeMolli, and three great-grandchildren. She was preceded in death by her husband Louis DeMolli who died March 1, 2011. The family has requested that in lieu of flowers memorial contributions be made to: Baptistery Fund Leesburg Church of the Nazarene 2100 Martin Luther King, Jr., Boulevard Leesburg, FL 34748

The family of Margaret Angelina DeMolli created this Life Tributes page to make it easy to share your memories.

Send flowers to the DeMolli family.