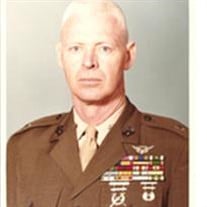 Terry W. Cannon, retired Lt. Col., USMC, 79, of Lady Lake, FL died Saturday, July 2, 2011 at the Villages Cornerstone Hospice House. A graduate of Fairfax High, in VA, he enlisted in the Marine Corps serving as an aircraft engine mechanic and attaining the rank of Staff Sergeant. Remaining in the active reserves, he attended The Citadel and graduated in 1959 with a commission in the reserves. He later received his Masters in Education. During the next 7 ½ years he was a teacher and coach at J.E.B. Stuart and James Madison High Schools in Fairfax County, VA. Returning to active duty with the Marine Corps, Terry served until June 1982 when he retired as the Senior Aircraft Maintenance Officer. A veteran of the Korean and Viet Nam wars, his personal decorations consisted of the Meritorious Service Medal, Air Medal, Navy Commendation Medal with Combat ‘V’, combat Action Ribbon, the Good Conduct Ribbon with two stars and was authorized to wear the Combat Air Crew Wings with three stars. He was a life member of the Marine Corps Aviation Association and the VFW. He was also an active member of the North Lake and the Phillip Delong Detachment of the Marine Corps League, Retired Officers Association, Marine Corps Mustang Association, the Toys for Tots Program, the American Legion, and the North Central Florida Mustang Club of America. He served tirelessly in his community and was a shining example that service to country does not end with active duty. In addition to service, Terry was an accomplished athlete and an avid hobbyist. Of note, he maintained an extensive model aircraft collection and was especially fond of his 1965 Ford Mustang convertible.Lt. Col. Cannon is survived by his wife, Anne Glover Cannon, son, Terry W. Cannon, Jr., Daughter, Carter Anne Cannon, granddaughters, Isabel Quinn and Angie Daniela and his brother, Kim C. Cannon.Internment will be scheduled in mid-November at the Florida National Cemetery, Bushnell. In lieu of flowers, please give to the Toys for Tots program, the Villages Cornerstone Hospice House and/or the Veterans Program at the Ocala Ritz Veterans Village (dedicated to ending veterans)

The family of Lt. Col. Terry Wells Cannon U. S. M. C. Ret. created this Life Tributes page to make it easy to share your memories.