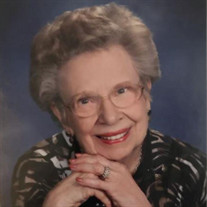 Dr. Louise Gentry Ingraham, 98, died on September 6, 2021, with her devoted husband of 30 years, Millman Ingraham, by her side. Louise was born September 20, 1922, in Reidland, Kentucky. She received her master's degree from Purdue University and earned her doctorate degree from Ohio State University. She was on the faculty at Washington State University for 10 years. In 1960 she accepted a position on the faculty at Colorado State University. In 1964, she moved to Penn State University and was on the faculty for over twenty years becoming the Associate Dean at the College of Human Development. Throughout her life, she maintained close relationships with her colleagues and former students. In 1967, Louise was honored by being appointed to President Lyndon Johnson's National Consumer Advisory Council and served for two years. Louise loved to travel. In 1953, she made a three month "around the world" trip with a colleague. At that time, it was quite unusual for two young women to travel alone to over 10 countries. Throughout her life, she made additional extended trips to over twenty countries including China and Russia. The true highlight of Louise's life was her marriage to Millman Ingraham. Although she was sixty-eight years old when she married for the first time, they had an amazing thirty-year marriage filled with family, friends, travel, ballroom dancing, parties, sports, and laughter.They were rarely apart from one another. Louise cherished her relationship with Millman's son and daughter-in-law, Mark and Kelly Ingraham and granddaughters Elyse and Amanda. They also enjoyed their many visits to Virginia with Millman's daughter Sharon (Russell) and Brent, Bryan, Bradley, and Brandy. While Louise did not have children of her own, she was an extraordinary aunt to her ten nieces and nephews and was the leader of the extended family fun. Millman and Louise maintained very close relationships with the twenty grandnieces and grandnephews and twenty-two great grandnieces and great grandnephews. She loved holidays, and it never really seemed like Christmas until Aunt Louise arrived with her surprises, poems, songs, games, and fun. She loved to entertain and hosted parties, especially birthday parties, with all the extra special touches. Funeral services will be held on Thursday, September 16, 2021 at 3:00 pm, over at Page-Theus Funeral Home in Leesburg, FL, with family receiving guests at the funeral hojme at 2:30 pm. Arrangements are entrusted to Page-Theus Funeral Home and Cremation Services, Leesburg, FL.

Dr. Louise Gentry Ingraham, 98, died on September 6, 2021, with her devoted husband of 30 years, Millman Ingraham, by her side. Louise was born September 20, 1922, in Reidland, Kentucky. She received her master's degree from Purdue University... View Obituary & Service Information

The family of Dr Louise Gentry Ingraham created this Life Tributes page to make it easy to share your memories.

Send flowers to the Ingraham family.