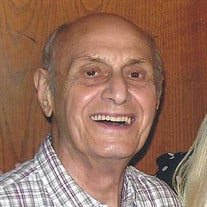 Louis L. Kovanda, 86, Leesburg, Florida passed away on April 5, 2016 at Leesburg Regional Medical Center, Leesburg, Florida. Mr. Kovanda was born on April 12, 1929 in Chicago, Illinois to his parents Louis Kovanda, Sr. and Agnes (Svatek) Kovanda. Mr. Kovanda was a retired Sales Manager for Sears, Roebuck & Co. He and his wife moved to Brandon, Florida in 1986 from Illinois and then to Leesburg, Florida in 1992. He was of the Presbyterian faith and a proud veteran who served in the U.S. Navy during the Korean War. He was a founding member of The Plantation Model Railroad Club in Leesburg, Florida. He enjoyed trains, shuffleboard, puzzles and he had a sweet tooth for “Tootsie Rolls and Twinkies”. He is survived by his loving wife of 65 years: Lorraine L. Kovanda of Leesburg, FL; two sons: Mike (Terry) Kovanda of Maplewood, MN and Gary (Jeanne) Kovanda of Rockton, IL; four grandchildren: Karen Kovanda, Nicole Kovanda, Kimberly Kovanda (Jeremiah Zachwieja) and Bradley Kovanda, as well as several loving nieces and nephews. In lieu of flowers, the family requests that donations be made to the charity of one’s choice in his loving memory. Arrangements are entrusted to Page-Theus Funeral Home, Leesburg, Florida. On-line condolences may be shared by visiting www.pagetheusfuneralhome.com.

The family of Louis L. Kovanda created this Life Tributes page to make it easy to share your memories.

Send flowers to the Kovanda family.