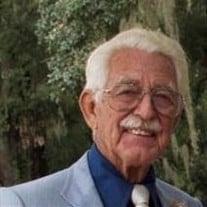 Loren G. “Lucky” Uridel, 87, Leesburg, Florida passed away at his residence on September 13, 2019. Lucky was born on January 8, 1932 in North Judson, Indiana to his parents Louis Uridel and Marie Gusta Long Uridel. He and his loving wife of 46 years, Carol moved to Leesburg in 1978 from Valparaiso, Indiana. Lucky was a pilot for many years and was the former owner of Lucky’s Aircraft in Valparaiso, Indiana and Aviation Biz in Leesburg, Florida. He is also the owner of U.S.A. Seamless Gutters in Leesburg. As a young man he was a member of the Boy Scouts of America where he earned the Eagle Scout award and went on to become a Scout Master of Troop 7, which became “Lucky 7” in Valparaiso where he had served for many years mentoring young boys into men. He was a proud veteran of the U.S. Air Force serving from 1951 to 1955. He was of the Catholic Faith and was a member of St. Paul Catholic Community of Leesburg, Florida. He was also a member of A.O.P.A (Aircraft Owners and Pilots Association) and the N.R.A. (National Rifle Association. He was a former member of the Knights of Columbus of St. Paul Catholic Church. He is survived by his sons: Loren Harry Uridel of California and Douglas Craig Uridel and his wife Victoria of Leesburg, FL; a daughter: Debora A. Uridel-Bronson and her husband Steve of Bushnell, FL; a sister: Darlene Uridel-Fuentes of California; six grandchildren: Ryan Scott Uridel, Courtney Maran Welch, Daniel Michael Hardaway, Kathleen Regina Uridel, Joseph Douglas Uridel and Emma Joleen Hardaway; five great-grandchildren and many loving nieces and nephews. He was proceeded in death by his parents, his beloved wife Carol Joan Powers-Uridel, his son, Bryan Scott Uridel, an infant son, John Uridel, his brother, Dr. Louis Uridel and a sister, Loretta Uridel. A Mass of Resurrection will be held on Friday, September 20, 2019 at 1:00PM at St. Paul Catholic Church, Leesburg, Florida with a Visitation to be held on Thursday, September 19, 2019 from 6:00PM to 8:00PM at Page-Theus Funeral Home Chapel, Leesburg, Florida. A Burial will follow the Mass at Hillcrest Memorial Gardens, Leesburg, Florida. Online condolences may be shared by visiting www.pagetheus.com.  Arrangements are entrusted to Page-Theus Funeral Home and Cremation Services, Leesburg.

The family of Loren G. Uridel created this Life Tributes page to make it easy to share your memories.

Send flowers to the Uridel family.