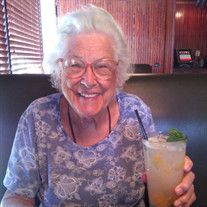 Lena Denachuck Arvidson, 97, Leesburg, Florida. Lena made her transition on December 31st, 2014. God called her home to celebrate with Him, her husband (Jack), sister (Olga), brother (Mike), and many friends. Lena was born on February 25, 1917 in Albion, Michigan to her parents Steve and Anna Denachuck. Lena graduated from Western Michigan College. She gave many years of service to the Red Cross as a volunteer who taught sewing classes. A member of the Albion Presbyterian Church and a former member of the Order of Eastern Star back in Albion, Michigan. She loved to crochet and make hats for The Moffitt Center and crochet afghans for the Boggy Creek Camp. She truly loved people, had a good sense of humor and never met a stranger. Lena married Jack Arvidson on February 3, 1944, who proceeded her in death on April 24, 2009. They had a son Allan Richard Arvidson. She leaves behind a devoted, loving “favorite” granddaughter, Alayna Jo Gonzalez (Mauricio) and her granddaughter’s loving caring, devoted mother, Patricia A. Burza (Donald). Also many special friends and neighbors. She truly was a kind, loving and sweet, non-judgmental soul. She brought to all she encountered a touch of God’s love. She will be truly missed by many loving friends & neighbors. She is one of those who brought such a great light to the world. That even though she is gone, the light remains. A Memorial Service Celebrating her life will be held at Pennbrooke Fairways Grand Hall in Leesburg on Monday, January 12, 2015 at 2:00PM. In lieu of flowers, the family asks that donations be made to the Leesburg Chapter of the Salvation Army or the Albion Presbyterian Church – 305 E. Porter St. – Albion, MI 49224. Services have been entrusted to Page-Theus Funeral Home, Leesburg, FL. On line condolences and memories may be shared by visiting www.pagetheusfuneralhome.com.

Lena Denachuck Arvidson, 97, Leesburg, Florida. Lena made her transition on December 31st, 2014. God called her home to celebrate with Him, her husband (Jack), sister (Olga), brother (Mike), and many friends. Lena was born on February 25, 1917... View Obituary & Service Information

The family of Lena D. Arvidson created this Life Tributes page to make it easy to share your memories.

Send flowers to the Arvidson family.