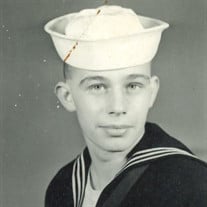 Lance Tufts Chamberlin, 78, of Leesburg, FL., passed away on March 1, 2022. Lance was born in Cooperstown, NY., on October 19, 1943 to the late Marguere and Lee Chamberlin. Lance served his country proudly with the US Navy. Lance lived in central New York until he retired from Carrier Air Conditioning after many years of service. He was a very hard working man who was able to retire in his mid fifties and moved to Leesburg with his wife Jane. His desire to go fishing as frequently as he could was tremendous! Family and friends would often receive selfies of Lance and the fish he caught. His love of fishing began as a child as he would fish with his grandfather and father. He later enjoyed this favorite pastime with his son and many friends he had made over the years. Anyone who had the pleasure of knowing Lance will remember his sense of humor! He was quick to come up with a joke or sarcastic remark to make you laugh. One of his favorite comments “Nobody said it would be easy” was heard often and will never be forgotten by his friends and loved ones. Lance had often said to “Live life to the fullest and as if it’s your last day” please take Lances advice as words to live by! Lance is survived by his loving wife Jane Chamberlin; his sons, Vance Chamberlin (Christine), Steve Sweet, and Eric Sweet (Grace); his daughters, Vicki Chamberlin Baldes (Fred), Kim Sheffer (Travis), and Debbie Jamison (Thomas); brother Brian Chamberlin (Rebecca), sisters Brooke Fountain, and D'Arcy Scalzo (Tony); 4 grandchildren, Edward Lance Piluso, Makayla Leigh Piluso, Carrie Sgroi, Cory Dailey; 1 great grandchild, Gabriel Sgroi; and a host of many numerous family and friends. Lance is preceded in death by his parents, his brother Gary Chamberlin, and his sister Leslie Matteson. The family of Lance will be receiving guests on Monday, March 7, 2022 from 3:00 PM to 5:00 PM, at Page-Theus Funeral Home in Leesburg. A funeral ceremony in his honor will follow at 5:00 PM. We will have a celebration of life at Highland Lakes Community Clubhouse, immediately following the funeral service at 5500 Clubhouse Drive, Leesburg, FL 34748 In lieu of flowers donations to be made to Wounded Warrior Project in Lance Tufts Chamberlin's name. Arrangements are under the care of Page-Theus Funeral Home, Leesburg , FL.

Lance Tufts Chamberlin, 78, of Leesburg, FL., passed away on March 1, 2022. Lance was born in Cooperstown, NY., on October 19, 1943 to the late Marguere and Lee Chamberlin. Lance served his country proudly with the US Navy. Lance lived in central... View Obituary & Service Information

The family of Lance Tufts Chamberlin created this Life Tributes page to make it easy to share your memories.

Send flowers to the Chamberlin family.