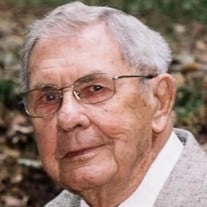 Keith E. Stoffels, 93, Lady Lake, Florida went to be with the Lord on February 24, 2021 at Mission Oaks, Oxford, Florida surrounded by his loving family. Keith was born on September 9, 1927 in Oshkosh, Wisconsin to his parents Harry and Johanna Stoffels. He was a former Licensed Funeral Director and Embalmer who had worked at Harris Funeral Home in Pontiac, Illinois for 25 years and locally at Page-Theus Funeral Home in Leesburg as well as Banks, Page-Theus Funeral Home in Wildwood, Hamlin and Hilbish Funeral Directors, Eustis and Steverson, Hamlin and Hilbish Funeral Directors, Tavares. Keith was a proud veteran of World War II, serving in the U.S. Army Air Force as a Sergeant. He and his loving wife Charlotte moved to Lake County in 2006 from Fletcher, North Carolina. Keith was of the Presbyterian faith. He was a member of The American Legion Post #219 of Fruitland Park, Florida. Keith had also belonged to The Veterans of Foreign Wars, The Moose Club, The Elks Club in Pontiac, Illinois. He had also belonged to the Masonic Lodge in Illinois as well as the Shriner’s Temple in Illinois. Keith is survived by his wife of 70 years: Charlotte Stoffels of Oxford, FL; three daughters: Shelly Wilson and her husband Dwight of Leesburg, FL, Lisa Brill and her husband Gary of Pontiac, IL and Wendy Norville and her husband Robert of Pontiac, IL; seven loving grandchildren and ten great-grandchildren. He was preceded in death by his parents and a beloved son, Jeffrey Stoffels. Services will be held at a later date at Florida National Cemetery, Bushnell, Florida. The family has requested in lieu of flowers donations may be made to The Shriners Hospitals at https://donate.lovetotherescue.org. Online condolences may be shared by visiting www.pagetheus.com. Arrangements are entrusted to Page-Theus Funeral Home and Cremation Services, Leesburg.

Keith E. Stoffels, 93, Lady Lake, Florida went to be with the Lord on February 24, 2021 at Mission Oaks, Oxford, Florida surrounded by his loving family. Keith was born on September 9, 1927 in Oshkosh, Wisconsin to his parents Harry and Johanna... View Obituary & Service Information

The family of Keith E. Stoffels created this Life Tributes page to make it easy to share your memories.

Send flowers to the Stoffels family.