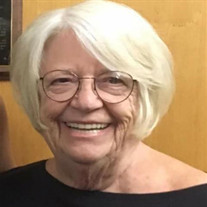 June Reynolds Hummel died suddenly, but peacefully, on October 18, 2019. Born on December 14, 1938 in Yonkers, New York, June graduated from Charles E. Gorton High School in 1956 and Endicott Junior College in 1958. While at Endicott, she was a member of the Language and Choral Clubs and the Senior Vocal Ensemble. She married Thomas Hummel in 1972 and moved to York, PA where they lived until retiring to Royal Highlands in Leesburg, Florida in 2001. They lived happily in their new community in central Florida until Tom’s death in 2015. Her many friends helped keep her life rich after Tom passed, and she continued to be very active in her bridge groups, kitchen band and the Royal Highlands Chorus. June was completely devoted to her family. She is survived by her dear daughters, Debra Kurucz (Jim Mack) and Jonna Kurucz (Rich Wada). Deb and Jonna spent many weekends in Florida helping June prepare for her recent move into a retirement community. They were quite a team. June was also supported and loved by her sister Lorna Jacobs (Barry) who survive as do Lorna and Barry’s two sons. She is also survived by Tom’s sons Matt and Paul Hummel. Her 6 grandchildren and great grandson brought her much joy, her house was full of pictures and clippings of their many accomplishments. She was also a devoted fan of all of her daughters’ and grandchildrens’ sports teams and was well loved in the stands at the many events she attended. She was a longtime volunteer and served as the Officials Secretary for the York Aquatic Club for many years. Everyone who knew June appreciated her love of life, loyal friendship and wonderful, heartwarming laugh. While her family grieves her passing, we are thankful that in a life that took her from New York, to York, to Central Florida, she touched so many lives and was surrounded by wonderful friends every step of the way. Her burial will be private and the family will communicate plans for a celebration of June’s life in Florida in the near future.

June Reynolds Hummel died suddenly, but peacefully, on October 18, 2019. Born on December 14, 1938 in Yonkers, New York, June graduated from Charles E. Gorton High School in 1956 and Endicott Junior College in 1958. While at Endicott, she was... View Obituary & Service Information

The family of June R. Hummel created this Life Tributes page to make it easy to share your memories.

Send flowers to the Hummel family.