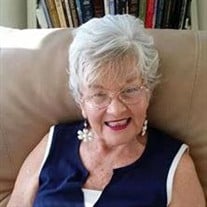 Julie Ann Tanner Springer, 75, Fruitland Park, FL went to be with the Lord on December 18, 2014 in The Villages, Florida surrounded by her loving family. Mrs. Springer was born on April 4, 1939 in Detroit, Michigan to her parents Dell and Lucille Tanner. She graduated from Lincoln High School in Ferndale, Michigan and attended Michigan State University and graduated in 1961. She received a teaching degree and went on to attend the University of New Mexico and received her MBA in 1968. Her faith in God began as a very young girl and has had a profound effect on her entire life. It gave her the great hope for life after death. She was a loving, caring, Mother, Grandmother and wife and a very personal friend to many. She met Red in Albuquerque, New Mexico during the summer of 1965 where she had a teaching contract. An engagement followed and they were married on February 8, 1966 at Coral Ridge Presbyterian Church in Ft. Lauderdale, FL by Rev. James Kennedy. They moved around the country and had various residences, which were Albuquerque, NM – Phoenix, AZ – Seattle, WA – San Francisco, CA – and 17 years in Fairfield, CT. In 1989, they retired and moved to Greenville, ME (Moosehead Lake) where they had purchased a summer home in 1979. They began to experience the RV life style and travelled the United States in various RV / Motor homes during the winters for 10 years plus. Their retirement provided them a life style of traveling that they preferred and they also purchased property in the mountain country of North Carolina, and then they finally settled in Central Florida. She is survived by her loving husband of 49 years: W E “Red” Springer of Fruitland Park, FL; children: Kevin William Springer and his wife Vanessa Turner Springer of Greenville, ME and Erin Kate Springer of Missoula, MT; Siblings: Dick Tanner of Fruitland Park, FL, Val Looney of Spring Hill, FL and Mary Edgar of Fruitland Park, FL; grandchildren: Jarvis Springer and Jace Springer of Greenville, ME. A Memorial Service will be held on Tuesday, December 23, 2014 at 2:00PM at First Baptist Church of Leesburg in the small chapel, located at 220 North 13th Street Leesburg, Florida 34748.

Julie Ann Tanner Springer, 75, Fruitland Park, FL went to be with the Lord on December 18, 2014 in The Villages, Florida surrounded by her loving family. Mrs. Springer was born on April 4, 1939 in Detroit, Michigan to her parents Dell and Lucille... View Obituary & Service Information

The family of Julie Ann Springer created this Life Tributes page to make it easy to share your memories.

Send flowers to the Springer family.