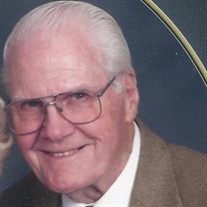 Joseph H. Wehmeier, 91 went to be with the Lord on April 17, 2015 with his loving family by his side. Joseph was born in Cincinnati, OH on October 7, 1923 to his parents Herman and Edith Wehmeier. He and his wife Ruth moved to Florida in 1989 from Cincinnati, OH. Joseph was an active member of Community United Methodist Church of Fruitland Park, FL. he graduated from Western Hills High School, Cincinnati, OH in 1941 and then later attended The University of Cincinnati, OH. On January 29, 1943 Joseph enlisted into the United States Marine Corps and proudly fought for our country during WWII. Joseph was a member of the Carson Masonic Lodge number 0598 of Cincinnati, OH and The Shriners. He was an avid softball player until the age of 83 and golfer until the age of 87. Joseph also coached knothole baseball and girls softball. He was an avid sports fan of baseball, golf, bowling, basketball, and football. He is predeceased by his Mother and father: Edith May and Herman Wehmeier; Brother: Herman R. Wehmeier; and Sister: Betty May Wehmeier. He is survived by his loving wife of 66 years: Ruth Wehmeier; Son: Thomas (Pamela) Wehmeier; Daughters: Linda (Richard) Lennerth and Sheryl Howell; Grandchildren: Jason (Stephanie) Wehmeier, Katie (Eric) Chilton, Sarah (MJ) Welwood, Timothy Beson,, Richard (Cary) Lennerth, Meagan (Jeff) Sutton,Edward Lennerth, Tori Knopf, and Christopher (Kelly)Monroe; Twelve Great-Grandchildren and many Nieces, Nephews, and Cousins. Joseph H. Wehmeier touched many lives and will be deeply missed. A private visitation and funeral service will be held on April 21, 2015 at 11:00 am at Page-Theus Funeral Home located at 914 West Main St, Leesburg, FL 34748. In lieu of flowers donations in memory of Joseph H. Wehmeier may be made to The Shriners Children’s Hospital. Donations may be made on line by visiting https://www.shrinershospitalsforchildren.org/donate or by mail to 2900 North Rocky Point Drive, Tampa, FL 33607. Services have been entrusted to Page-Theus Funeral Home, Leesburg, FL. On line condolences and memories may be shared by visiting www.pagetheusfuneralhome.com .

Joseph H. Wehmeier, 91 went to be with the Lord on April 17, 2015 with his loving family by his side. Joseph was born in Cincinnati, OH on October 7, 1923 to his parents Herman and Edith Wehmeier. He and his wife Ruth moved to Florida in 1989... View Obituary & Service Information

The family of Joseph H. Wehmeier created this Life Tributes page to make it easy to share your memories.

Send flowers to the Wehmeier family.