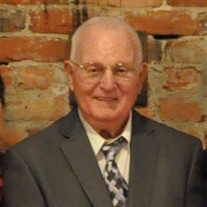 Joseph P. Asselin 1922 - 2014 Joseph P. Asselin, 92, of Fruitland Park FL died Tuesday December 3, 2014 at his daughter’s home in North Carolina. He was born in Lewiston ME on January 13, 1922, son of Fidelis and Dora (Caron) Eslin. He was married to the former Doris St. Pierre who died July 2, 2001. He enlisted in the United States Navy in 1942 and was honorably discharged in 1948 with a ranking of Gunner’s Mate 2 and earned four Medals; the World War II Victory Medal, American Area Campaign Medal, Good Conduct Medal and Asiatic Pacifica Campaign Medal. He worked at Raytheon/Honeywell for 25 years. He started as a circuit technician, advanced to Engineering Assistant and because of his intimate knowledge of the methods and techniques of fabrication he was transferred to the NPL Prototype lab where he stayed until he retired in 1976. He is survived by one brother, Ralph Asselin of Lewiston ME, seven children; Linda (Asselin) Doherty of Chandler AZ, Milton and Constance (Asselin) Moffett of Matthews NC, Henri Asselin of Derry NH, Paul and Sandra Asselin of Dover NH, Marian (Asselin) Lupien of Port Richey FL, Richard and Elaine (Asselin) St. Cyr of Fruitland Park FL and Michael and Claire (Asselin) Driscoll of Canton MA, along with 17 grandchildren and 33 great-grandchildren. A Mass of The Resurrection celebrating Joseph's life is planned for 8:30 A. M. - Thursday, December 18, 2014 at St. Paul's Catholic Church, Leesburg, Florida. Interment with Navy Honors will follow at Florida National Cemetery, Bushnell, Florida. Online condolences and sharing of memories may be expressed at: http://www.pagetheusfuneralhome.com In lieu of flowers, donations may be made in his name to: Disabled American Veterans P. O. Box 14301 Cincinnati OH 45250-0301 Or online at: DAV.org

The family of Joseph Paul Asselin created this Life Tributes page to make it easy to share your memories.

Send flowers to the Asselin family.