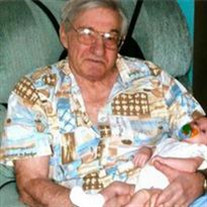 McKinney, Joseph AnthonyJoseph Anthony McKinney age 84 passed away early Saturday morning, November 21, 2009 at the Cornerstone Hospice House - Tavares, Florida. He was born January 5, 1925 in Brooklyn, New York, and moved to the Leesburg area in 2001 from San Diego, California.Mr. McKinney worked in the construction industry as a Master Carpenter and was recently honored by his union "The United Brotherhood of Carpenters" for his 63 years of continuous membership. He proudly served his country in the United States Navy during World War II as a machinist and then in Korea as a demolitions controller. He was a member of the Elks, Sons of Norway, and was an avid golfer and even though he did not start golfing until retirement he was able to score 3 hole-in-ones. He also enjoyed boating, coin collecting and firearms. He is survived by his loving wife of 63 years - Alice; His daughters and sons-in-law - Diane A.& Robert Gatto of Leesburg and Kathleen L. and Harvey Sperling, of Kissimmee; Grand Daughter and her husband Alicia and Louis Zabat of Kissimmee; and Great-Grand Daughter - Izabella Zabat.The family will have a service of remembrance at the Page-Theus Funeral Home Chapel 914 West Main Street, downtown Leesburg on Saturday, November 28th at 1:00 P. M. and a inurnment service with Navy Honors at the Florida National Cemetery, Bushnell Florida on Tuesday - January 5, 2010.Memorial contributions are suggested to: Cornerstone Hospice - Tavares, Florida or to an animal shelter in your area. Page-Theus Funeral Home has been entrusted with all arrangements.

The family of Joseph Anthony McKinney created this Life Tributes page to make it easy to share your memories.

Send flowers to the McKinney family.