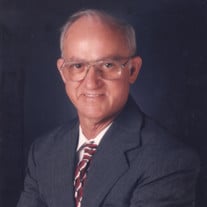 John S. Smith, Jr., 80, The Villages, FL. went to be with the Lord on April 19, 2015 at The Villages Regional Hospital. Mr. Smith was born on September 3, 1934 in Dothan, Alabama to his parents John S. Smith, Sr. and Mattie (Hobbs) Smith. Mr. Smith was employed with the U.S. Postal Service for over 20 years. He and his wife moved to The Villages 2 years ago from Valrico, Florida. He was a member of the Bell Shoals Baptist Church in Brandon, Florida. Mr. Smith was a U.S. Army veteran serving from 1952 to 1954. He loved to play contract bridge and many other card games with his family. He was a good chess player, enjoyed shooting a good game of pool, as well as bowling, fishing and shooting his handgun at the pistol range. He is survived by his loving wife of 20 years: Miriam L. Smith of The Villages, FL; a son: John Steven Smith of Pensacola, FL; three daughters: Amy D. Baker (Lewie) of Troy, AL, Pamela Killingsworth (Johnny) of Brundidge, AL and Victoria Doud of Valrico, FL; a sister: Tabbie Weathers of Ashford, AL; a sister-in-law: Mary Smith of Alabama; ten grandchildren: Cody, Kala, Kim, Wes, Mitchell, Hillary, Hannah, Tina, Bryce and Zachary; four great-grandchildren and many loving nieces and nephews. A visitation will be held on Friday, April 24, 2015 from 12:00PM to 2:00PM at Ward-Wilson Funeral Chapel, located at 2414 Hartford Highway, Dothan, AL 36305. Funeral Services will follow the visitation at 2:00PM in the funeral home chapel with Brother Michael Radar Officiating. Burial to follow at Mount Gilead Baptist Church Cemetery, Dothan, AL. On line condolences and memories may be shared by visiting www.pagetheusfuneralhome.com.

The family of John S. Smith Jr. created this Life Tributes page to make it easy to share your memories.