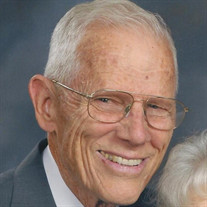 John A. Mortensen, 85, of Leesburg, Florida went to be with his Lord and Savior at the Cornerstone Hospice house in Tavares, FL, June 16, 2014. Dr. Mortensen was born May 11, 1929 in San Antonio, Texas to parents Ernest and Velma Mortensen. John was a Research Professor for the University of Florida in the field of Plant Genetics for 30 years. He was well known around the country for his research in grape propagation, and produced Florida's first seedless grape. He was inducted into the Florida Agriculture Hall of Fame in 1991. John began his early agriculture career in Texas at a experiment station that his father managed. Later, he entered Texas A&M where he earned his Bachelor's and Master's degrees. During the Korean war, he was a First Lieutenant stationed in Brooklyn on the docks. Because of his grandmother's prayers for his safety, every time an order came for his deployment, it was rescinded. Following his Army discharge, he spent a few years in Jordan, visiting his parents, and teaching English to Jordan's military men. After that, he entered Cornell University and earned his PhD in plant breeding. At this time, he met his wife, Dorothy (Dottie) and, with God's blessing, their love continued to flourish through 57 years of marriage. John was a gentle, godly, loving man to all, and his family and friends were his treasures. For over 30 years, John and his wife held weekly church services in area nursing homes. They were also long time members of First Baptist Church Leesburg. He is survived by his wife, Dorothy; daughter, Cynthia; brother, James; and grandson, Kevin Flinn (Jessica). He was preceded in death by his parents, Ernest and Velma; brother, Charles; and sister, Marie Stockwell. Funeral services will be held on Wednesday, June 25, 2014 at 3:00 PM at Page-Theus Funeral Home, Leesburg, FL with a visitation to be held from 2:00 PM until the hour of the service. On line condolences and memories may be shared by visitingwww.pagetheusfuneralhome.com|

John A. Mortensen, 85, of Leesburg, Florida went to be with his Lord and Savior at the Cornerstone Hospice house in Tavares, FL, June 16, 2014. Dr. Mortensen was born May 11, 1929 in San Antonio, Texas to parents Ernest and Velma Mortensen.... View Obituary & Service Information

The family of John A. Mortensen, PhD created this Life Tributes page to make it easy to share your memories.

Send flowers to the Mortensen family.