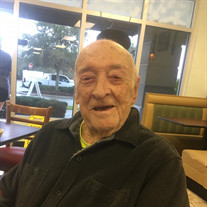 John J. Hayes, 91, Clermont, FL passed away on April 22, 2017 at South Lake Hospital, Clermont, FL. Mr. Hayes was born on August 30, 1925 in Scranton, Pennsylvania to his parents William A. Hayes and Florence (Fitzgerald) Hayes. Mr. Hayes was a former Freight Claims Agent for the Railroad and had retired from Conrail with over 44 years of service. He had moved to Central Florida in 1984 from Buffalo, New York and was a member of Blessed Sacrament Catholic Church in Clermont, FL. He was a proud veteran who served in the U.S. Navy during World War II on board the USS Intrepid. He was a member of the American Legion in Hamburg, NY and the Knights of Columbus, Father Baker Council in Lackwanna, NY. He was an avid gardener and liked working on projects around his home. He also enjoyed watching college basketball and football on television. He is survived by his five sons: Michael Hayes of Clermont, FL, Robert Hayes of Orchard Park, NY, John R. Hayes of Hamburg, NY, Kevin (Evette) Hayes of North Collins, NY and Daniel (Vanessa) Hayes of East Aurora, NY; two daughters: Jeannie Hayes of Hamburg, NY and Maureen (Edwin) Zarnowski of Winter Garden, FL; a brother: Joseph Hayes of Hamburg, NY; ten grandchildren; six great-grandchildren; two great-great-grandchildren and many nieces and nephews. A Mass of Resurrection will be held on Monday, July 3, 2017 at 9:00AM at St. Bernadette Catholic Church in Orchard Park, New York. Donations may be made to the charity of one’s choice in loving memory Mr. Hayes. Online condolences may be shared by visiting www.pagetheus.com. Arrangements are entrusted to Page-Theus Funeral Home and Cremation Services, Leesburg.

The family of John J. Hayes created this Life Tributes page to make it easy to share your memories.

Send flowers to the Hayes family.