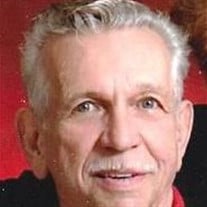 John Duane Fitch age 79 passed away Wednesday, May 21, 2014 in Leesburg, Florida. John was born in Highland Park, Michigan and moved to the Leesburg area in 2011 from Houghton Lake, Michigan. He had a career spanning over 33 years with General... View Obituary & Service Information

The family of John Duane Fitch created this Life Tributes page to make it easy to share your memories.

Send flowers to the Fitch family.