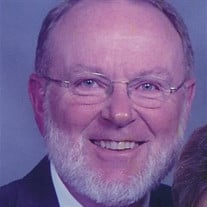 John Schuyler Bentley, 79, beloved husband of Elaine Schiferl for 56 years, died at home on October 7, 2019. John was born in Lincoln, NE, on March 23, 1940. He attended Lincoln Southeast High School and graduated from the University of Nebraska in 1963 with a degree in Mechanical Engineering. He began his career in Great Bend, Kansas, where he was employed by Western Light & Telephone. In 1967 he moved to Groton/New London, Connecticut and was employed by Electric Boat, a division of General Dynamics. After retiring from General Dynamics in 1996 he moved to the Chesapeake Bay area and later became a resident of The Villages, FL. He served on the boards of the Ledyard Sportsmen’s Club in Connecticut, The Rappahannock Pistol and Rifle Club in Virginia, and the Ocala Sportsmen’s Association in Florida. For many years he sailed the New England coastal waters, the Intracoastal Waterway, as well as the Chesapeake Bay area and especially enjoyed chartering in the British Virgin and Leeward Islands. He was an avid target pistol shooter, enjoyed traveling and always had a novel close at hand. He was a gracious, gentle man who cherished life with a positive attitude. In addition to his wife, he is survived by his brother-in-law (Eugene), sister-in-law (Rosemary), as well as several nieces and nephews. He was preceded in death by his parents. Memorials may be made in John’s loving memory to Cornerstone Hospice, 601 Casa Bella, The Villages, Fl 32162 or the American Cancer Society, 13940 N US Hwy 441, Bldg. 200, Suite 205, The Villages, FL 32159 Arrangements entrusted to Page-Theus Funeral and Cremation Services, Leesburg, FL. Private family services will be held at a later date. Burial will be in Hillcrest Memorial Gardens, Leesburg, Fl. Online condolences may be shared by visiting www.pagetheus.com.

John Schuyler Bentley, 79, beloved husband of Elaine Schiferl for 56 years, died at home on October 7, 2019. John was born in Lincoln, NE, on March 23, 1940. He attended Lincoln Southeast High School and graduated from the University of Nebraska... View Obituary & Service Information

The family of John Schuyler Bentley created this Life Tributes page to make it easy to share your memories.

Send flowers to the Bentley family.