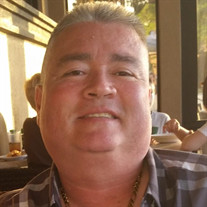 Jesus "Jesse" Maria Perales was born in Chicago, Illinois on March 5, 1966, and was called away by his heavenly father on Wednesday, December 9, 2015. Raised by loving +parents, two brothers (Louis and Raul) and two sisters (Patty and Lorena). Jesse was born the oldest, which naturally placed him in the position of leader, companion, protector and counselor for his younger siblings. These were roles that he cherished, loved, and occasionally misused. ;) Jesse spent his spare time at the Boys and Girls Club on Cermak Road, just down the block from where his dad owned a tire shop. When not at the Boys and Girls Club, Jesse enjoyed playing basketball for St. Casimir Elementary School. And THAT is where it began… Although still a boy in 6th grade, he met a beautiful young girl who would become the love of his life. In 9th grade the basketball player decided to ask the beautiful cheerleader on a date. Sandra Rodriguez was thrilled and so accepted his date offer and many more afterward. After dating for eight years, the two decided to wed, and so on June 18, 1988, at St. Casimir Parish Church they were married. Jesse swept Sandra away to Maui, Hawaii where they enjoyed a 10-day fairytale tropical honeymoon. Shortly after their return to the mainland, the two discovered that they would soon be three. With joy, they began their family. Jesse and Sandra were blessed with three wonderful sons, Jesus “Jesse” Manual, Fabian Anthony, Julian Andres, and one treasure, a daughter, Chaly Anais. Jesse, Sandra and their family happily lived their lives in Chicago, Illinois surrounded by family and friends. He definitely had a love for hats and would be seen every day wearing a hat while driving in the trucking industry as an owner/operator. After spending their first 15 years of marriage in Chicago, the family relocated to Auburndale, FL. It is here that his children became adults and blessed Jesse and Sandra with the next generation of Perales children, their grandchildren, Jaziah, Jazell, Fabian, and Ruthella. It is in Florida that Jesse truly began to enjoy life to the fullest, as he said moving here gave him a true sense of peace and joy that he never had a chance to experience before. With that being said, Jesse started to learn little by little, that he could relax and enjoy what life had to offer. One of the many things he always wanted was to own a Harley-Davidson motorcycle, and so Jesse bought a Sportster, which he loved. He spent many days out on those long Florida roads, hat back, wind in face, riding. He also enjoyed and looked forward to spending his weekends at the Auburndale Flea Market, where he developed many friendships. The transition to Florida turned out to be one of the best decisions he and Sandra ever made for his family and their lives. Even as Jesse struggled with major health issues throughout his life, his upbeat personality and razor sharp sense of humor, which is legendary among those that knew him, were always there. One could even say that Jesse was a walking miracle, a testament of God’s greatness and grace. Jesse enjoyed studying the word of God and began every day with a conversation with his Lord and Savior Jesus Christ. He always gave thanks for his many blessings and for the strength he received daily. His supportive and loving wife, Sandra always by his side and the two got through very difficult times together. This was the stepping stone for their children to learning how true love and strength and support should be lived in life. A man filled with love and a protective instinct for his family. He will always be remembered for his charismatic personality that would draw people to him and commanded respect without it ever being asked for. His kind and generous spirit was one that you could count on if ever you had need of anything. Jesse left this earth with his family by his side at the Winter Haven Hospital in Winter Haven, FL. He was and is a true testament of God’s glory. In the time that our Heavenly Father granted us with Jesse, he taught us to stay strong, persevere through difficulties, never give up, always put your trust and faith in the Lord, and always take care of your family and friends. THE FAMILY WOULD LIKE TO INVITE YOU TO JOIN THEM FOR JESSE’S MEMORIAL SERVICE. SERVICE INFORMATION: SATURDAY, DECEMBER 12, 2015 FROM 12:00-1:30 P.M. IMPRINT MINISTRIES 1503 6TH STREET, S.E. SUITE A WINTER HAVEN, FL 33880 In lieu of flowers, memorial contributions may be made to the family. We appreciate all the prayers, love, and support. All arrangements are under the careful direction of Page-Theus Funeral Home and Cremation Services.

Jesus "Jesse" Maria Perales was born in Chicago, Illinois on March 5, 1966, and was called away by his heavenly father on Wednesday, December 9, 2015. Raised by loving +parents, two brothers (Louis and Raul) and two sisters (Patty and Lorena).... View Obituary & Service Information

The family of Jesus "Jesse" M. Perales created this Life Tributes page to make it easy to share your memories.

Jesus &quot;Jesse&quot; Maria Perales was born in Chicago, Illinois on...

Send flowers to the Perales family.