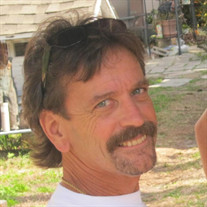 Jeffrey T. Hull Sr., age 63, passed away October 16, 2021, at his beloved home, known as The House of Roses, in Port Orange, Florida. Jeff was born February 5, 1958, in Ft. Lauderdale, Fl and raised on the Eastern Shore of Virginia in the “Mayberry-like” town of Onancock. He grew up with an Andy Griffith lifestyle. Safe, clean, fun. He loved sports, running cross-country in High School and carried on the family tradition of becoming an Eagle Scout in the Boy Scouts of America. He graduated from Onancock High School and attended Virginia Wesleyan University. Jeff returned to Florida in 1980, managing Long John Silver’s in South Daytona for 10 years, where he developed a talent for customer service, cooking and, most importantly, mentoring young people. Many lives were transformed by Jeff’s guidance, enthusiasm for life and open-door hospitality for those in need. He remained in touch with many, who became family, throughout the rest of his life. A career change in the 1990s led him to the Daytona Pennysaver, a weekly shopper newspaper, where he became the Circulation Manager and eventually retired in 2005. His popularity among co-workers and customers was strong, once again garnering friends who became family for life. Jeff was first diagnosed with cancer in 2007, but that never diminished his sense of adventure. He and his best buddy began a motorcycle quest on long road trips covering the entire continental U.S., managing to drive their Harley Davidsons in every state. Their biggest challenge and accomplishment was a trip in which they rode from Florida to Alaska and back in just 30-days. During his retirement years Jeff focused on family, friends and, most importantly, his son, Jeff Jr., becoming an Assistant Scout Master and helping Jeff Jr. achieve his Eagle Scout status in the BSA. Jeff was famous for entertaining and cooking, his nickname being “Chef Jeff”. Tiki Bar parties at home were notorious because of his hospitality, fabulous food, and sense of fun. He was ‘wicked funny’. Jeff was preceded in death by his father, Donald D. Hull, mother, Helen Jean T. Hull, a brother Kim A. Hull, mother-in-law Suzanne R. Green and a brother-in-law Dan D. Gillespie. Survivors include his wife, Kelli J. Hull, son Jeffrey T. Hull, Jr.; daughter Jade Vasquenza (son-in-law PJ Vasquenza); grandchildren Mackenzie, Kyler, Landon and Josie; sister Cindy Schultz (brother-in-law Rod Schultz); sister Susan Morton, and brother Jim Hull (sister-in-law Judy Hull); sister-in-law Debra S. Gillespie, nephew Corey J. Holder (partner Michael L. Castillo), nephew Christopher R. Holder, grand-niece Hannah, sister-in-law Linda M. Franklin (brother-in-law Frank W. Franklin), sister-in-law Kim Gillespie. A Celebration of Life to honor Jeff’s tremendous legacy will be held at the family’s home on November 27, 2021. All are welcome.

The family of Jeffrey Todd Hull Sr. created this Life Tributes page to make it easy to share your memories.

Send flowers to the Hull family.