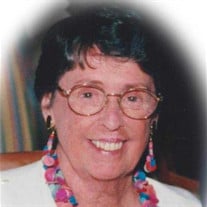 Jane Arnold Jarecki, 88, of Leesburg, Florida, passed away on Thursday, March 29, 2018 surrounded by her family. Jane is survived by her four daughters, Marie Huff (Mark) of Orange, California; JoAnne Groce (Matt) of Longwood, Florida; Patricia Pugh of Richmond, Virginia; and Carol Ryan (Dan) of Winter Garden, Florida; and 12 grandchildren: Jacqueline, Adrienne and David Huff; Heather, Bethany and Jennifer Groce; Justin, Brandon and Dana Pugh; and Timothy, Jonathan and Katelyn Ryan. She is preceded in death by her husband of 54 years, Eugene Alois Jarecki, who passed away in 2013. They lived in the Highland Lakes Community in Leesburg for 24 years. Jane was a member of St. Paul’s Catholic Community. Jane was born on January 21, 1930 in Chicago, Illinois. She graduated from Colorado College in 1953. Jane worked as an insurance adjuster for various insurance companies. She met her husband, Gene, while skiing in Denver, Colorado, where they were married and started their family. They moved to Ann Arbor, Michigan in 1968 and then to Alexandria, Virginia in 1979. After retiring, Gene and Jane relocated to Leesburg, Florida in 1994. They were able to travel quite a bit, visiting Alaska, New Zealand, Australia, Mexico, Hawaii, the U.S. West Coast, Canada and the Fiji Islands. They maintained a cabin in Skanee, on Huron Bay off of Lake Superior in the upper peninsula of Michigan, where they spent time every summer up until the last couple of years as Gene’s health declined. A memorial service will be held on Monday, April 2, 2018 at 2:30 pm, located at Page-Theus Funeral Home, 914 W. Main St., Leesburg, FL 34748. In lieu of flowers, donations may be made to Salvation Army or Cornerstone Hospice of Tavares. Online condolences may be sent at pagetheusfuneralhome.com. Arrangements under the care of Page-Theus Funeral Home and Cremation Services.

The family of Jane A. Jarecki created this Life Tributes page to make it easy to share your memories.

Jane Arnold Jarecki, 88, of Leesburg, Florida, passed away on...

Send flowers to the Jarecki family.