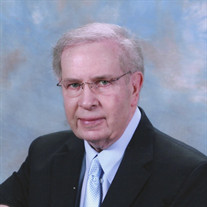 James "David" Woerner, 82, passed away on November 15, 2021. Dave was born on December 22, 1938 to the late Florence and Wilbur Woerner Sr. He was the 9th child, having 5 brothers, Wilbur Jr., Earl, Richard, Philip and William Preston; and four sisters, Dorothy, Florence, Lorraine (Raine) and Alice. Dave served in the U.S. Air Force, Strategic Air Command at DYISS Air Force Base in Texas. He was a member of the baseball team and band. While at the air base, he won a talent contest for singing and was sent to Hollywood California for a talent show. After leaving the Air Force, he continued with his singing and his acting. In New York City, he worked at the Metropolitan Opera as an extra. Dave also sang the Miss Maryland contest in 1965. He joined the United Methodist Church choir and married the choir director, Betty Shaffer. They were married for fifty-two wonderful years. While married, Dave was employed with Arundel Corporation for nineteen years. He left Arundel Corp. and joined The Fiber Mesh Company, until retiring in 2003. In 2009 Betty and Dave relocated to Leesburg Florida. His wife Betty wishes to thank all the wonderful support from the Crane's View Lodge Assisted Living, The Lakes of Clermont Rehab. Center, The Village Veranda at Lady Lake, Shands Cancer Hospital Gainesville, and Vitas Edgewater hospice staff. The family of Dave will be receiving friends at Page-Theus funeral home on Friday, November 19, 2021 at 10:00 AM, a funeral in his honor will follow at 11:00 AM. Pastor Mario Livar will be presiding. A viewing will be held at Kaufman Funeral Home, on November 23rd from 10:00 AM to 12:00 PM, followed by a graveside service at Meadowridge Cemetery in Elkridge, Maryland starting at 12:00 PM. A Luncheon will follow the Graveside Service at Kaufman Funeral Home. Arrangements are entrusted to Page-Theus Funeral Home and Cremation Services, Leesburg, FL.

James "David" Woerner, 82, passed away on November 15, 2021. Dave was born on December 22, 1938 to the late Florence and Wilbur Woerner Sr. He was the 9th child, having 5 brothers, Wilbur Jr., Earl, Richard, Philip and William Preston; and four... View Obituary & Service Information

The family of James David Woerner created this Life Tributes page to make it easy to share your memories.

Send flowers to the Woerner family.