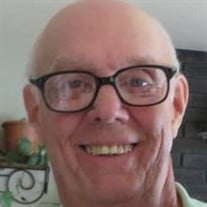 James Robert "Jim" McCoy James Robert "Jim" McCoy, 77, of Leesburg, Fla., died Sunday, March 11, at the Villages Regional Hospital in Florida. He is survived by his wife, Carolyn (Alpert) McCoy, of Leesburg, Fla.; brother, John McCoy, of West Harrison, Ind.; son, John McCoy, of Wesley Chapel, Fla.; daughter, Melissa McCoy, of Pasadena, Calif.; three grandchildren; and three great-grandchildren. Mr. McCoy was born Dec. 28, 1940, in Cincinnati, Ohio, to Robert and Norma (Schulze) McCoy. He graduated from Harrison High School, in Harrison, Ohio, in 1958. He attended the University of Cincinnati. He served in the U.S. Army as a medic and medical equipment repairman for six years, with postings to South Korea and Fort Belvoir, Va. He and Carolyn were married July 20, 1961, at Fort Belvoir. Mr. McCoy worked primarily in trucking — in management and as a driver. Outside of work, he enjoyed playing and coaching softball, bowling and fishing. He was an avid do-it-yourselfer, exemplified by the planning and construction of his and Carolyn's house in Oregonia, Ohio. He retired to the Pennbrooke Fairways community, where golf and cooking became his passions. He also enjoyed trivia competition, bridge and poker at Pennbrooke, where he leaves behind many friends. Mr. McCoy will be inurned at Florida National Cemetery in Bushnell on March 29, 2018 at 11:A.M.

The family of James Robert "Jim" McCoy created this Life Tributes page to make it easy to share your memories.

Send flowers to the McCoy family.