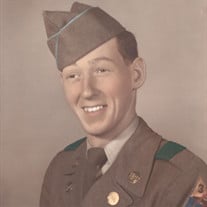 James Henry Burdin, 89, went to be with the Lord on July 24, 2015. He was born on May 28, 1926 in Chicago, Illinois to James and Winifred Frye Burdin. James started his sales career at age thirteen hoofing it on the streets of Chicago selling magazines. After Pearl Harbor he enlisted in the Merchant Marines and served from. May,19th to July 30, 1945 in the Pacific war zone. He was then drafted by the Army and served his country from June 27, 1946 to May 26, 1947 and drafted again by The United States Army and served from October 06, 1950 to October 05, 1954. After his service to our country he restarted his sales career selling insurance, Encyclopedia Britannicas , RVs and Real Estate. He enjoyed tinkering with cars, especially Cadillacs, and spending time with his family. People who knew James would describe him as a good conversationalist who always had an opinion. He volunteered for Cornerstone Hospice for several years. He was a Christian, a family man, a loyal and a loving father and a devoted husband. He will be deeply missed by those who knew him. He is predeceased by his loving wife of 54 years, Vicki (Cobb) Burdin. He is survived by his sons: Ross Burdin, of Leesburg, FL and Ryan (Barbara) Burdin, of South Bend, IN; daughter: Rhonda (Ronald) Woodard, of Ocala, FL, grandchildren, Aaron M.(Kim) Burdin, David M. Burdin, and Camee L. Burdin; three Great-Grandchildren, Keegan, Eva and Hannah Burdin as well as James Dale Burdin who is due to arrive on October 30, 2015. A memorial service will be held at a later date for the family. In lieu of flowers donations may be made to Cornerstone Hospice on line at http://cshospice.org. or to Leesburg Christian Center by mail at address: 2508 Westside Dr. Leesburg, FL 34748 or by phone at (352) 787-6392 Services have been entrusted to Page-Theus Funeral Home, Leesburg, FL. On line condolences andmemories may be shared by visiting www.pagetheusfuneralhome.com.

James Henry Burdin, 89, went to be with the Lord on July 24, 2015. He was born on May 28, 1926 in Chicago, Illinois to James and Winifred Frye Burdin. James started his sales career at age thirteen hoofing it on the streets of Chicago selling... View Obituary & Service Information

The family of James Henry Burdin created this Life Tributes page to make it easy to share your memories.

Send flowers to the Burdin family.