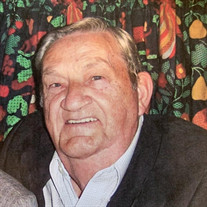 Jack Johnston, born August 8, 1929, passed peacefully into eternal life with his family by his side. Jack was born in St. Ignace, Michigan, the son of the late Irene Goff. Hospice had been his in-home caregiver for a month. After graduating from William Chrisman High School, in Independence, Missouri he began his life of dedication to his country by serving in the U.S. Air Force as an Air Traffic Controller and as an organizer of Ground Observer Posts in the St. Joseph, Mo. Area. Jack spent twelve years in the Air Force at a number of bases in the U.S. as well as Japan and Korea. Prior to military service he worked as a salesman and a semi-professional photographer. He was an avid reader and enjoyed a variety of hobbies including RV travel in the USA. On August 20, 1957, Jack married the love of his life and best friend, Lorraine (Maggy) Johnston, soon after he left the military to complete college and began a teaching career at Northeastern Clinton Central in Champlain., NY as a high school Social Studies teacher. Almost 25 years later retirement became the new career with more concentrated travel in the United States the norm. Life got even better. Jack is survived by his devoted spouse, Lorraine (Maggy) Johnston of Peru, NY and Leesburg, FL, a beloved son, Scott and daughter-in-law, Marlene and a grandson, Max of Baton Rouge, La. Also surviving is Lulu Maggy, Mother-in-law of Peru, NY and Florida. Jack was predeceased by his mother, Irene Goff and a half brother and sister-in-law, Jim and Ester Johnston and their son of Michigan. Jack was a parishioner of St. Augustine Catholic Church in Peru, NY and upon moving to Florida was a devote communicant of St. Paul’s Catholic Church of Leesburg, FL. Mass of Christian Burial and celebration of life will be held at St. Paul’s Catholic Church in Leesburg on Thursday, February 17, 2022 at 8:30AM and interment at St. Augustine’s Cemetery, Peru, NY at a later date. Online condolences may be made at www.pagetheusfuneral.com. Arrangements entrusted to Page-Theus Funeral Home & Cremation Services, Leesburg, FL.

Jack Johnston, born August 8, 1929, passed peacefully into eternal life with his family by his side. Jack was born in St. Ignace, Michigan, the son of the late Irene Goff. Hospice had been his in-home caregiver for a month. After graduating... View Obituary & Service Information

The family of Jack Johnston created this Life Tributes page to make it easy to share your memories.

Send flowers to the Johnston family.