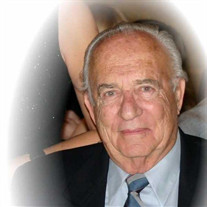 Howard E. Grant, 92, Leesburg, Florida, a beloved husband, father, and grandfather, passed away on September 18, 2017, at Leesburg Regional Medical Center. Howard was born on August 8, 1925, in Brooklyn, New York. He and his wife Janice moved to Leesburg in 2005 from Hollywood, Florida. He was a proud World War II veteran who served in the U.S. Air Force as a pilot. He moved from Farmingdale, New York, to South Florida in 1977. He was the owner of County Frame of Florida for 25 years in Hollywood, FL. He was a former member of the U.S. Coast Guard Auxiliary (South Shore Long Island), and a Commodore in the Eastern Shores-Aventura Yacht Club in North Miami, FL. He was mechanically gifted, and could fix or repair almost anything. He was an inventor issued 4 patents in his name. He had been licensed as a Boat Captain and a commercial pilot. He loved to travel the world; he explored America in his RV or boat; followed current events; was an avid learner; and built model planes, boats, and trains. Never idle, at the age of 90 he learned to sew, and made comfort pillows for cardiac patients and stuffed bears for displaced children. Howard cared deeply for his family, and exemplified the values, resilience, and character of the “Greatest Generation”. A lovable curmudgeon, he leaves behind his beloved and devoted family. He will be deeply missed. He is survived by his loving wife of fifteen years, Janice Grant of Leesburg, FL; son Robert (Margaret) Grant of Bradenton, FL; daughter Linda Lee Grant of Plantation, FL; granddaughter Emily Grant of Bradenton, FL; family dog Poppy; loving children by marriage: Lance (Jodi) Simkins of Parkland, FL; Sherri (Jim) Myers of Coral Springs, FL: Debbie Baraoidan of Weston, FL; Scott (Marie) Simkins of Trinity, FL; and eight grandchildren by marriage (Jessica, Samantha, Carrah, Sean, Drew, Jimmy, Matthew, and Joshua). He was preceded in death by his beloved mother Ruth (Stein) Carmel and father Sam Goldman. Funeral Services will be held on Thursday, September 28, 2017, at 10:30 AM at Page-Theus Funeral Home, Leesburg, FL. A Graveside Funeral Service with Military Honors will follow the funeral at 1:00 PM at Florida National Cemetery, Bushnell, Florida. Online condolences may be shared by visiting www.pagetheusfuneral.com. Arrangements are entrusted to Page-Theus Funeral Home, Leesburg. Memorial donations may be made to the American Heart Association.

The family of HOWARD E. GRANT created this Life Tributes page to make it easy to share your memories.

Send flowers to the GRANT family.