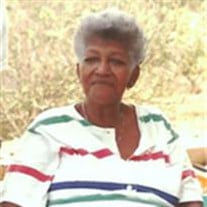 Helen N. Martyn age 97 passed away Sunday, March 18, 2012 at the Leesburg Regional Medical Center, Leesburg, Florida. She was born in Mayaguez, Puerto Rico and she was raised in her family’s homeland of Curacao, Netherlands, Antilles. She immigrated to New York City from Curacao in 1929 where she lived in Brooklyn, Manhattan, the Bronx and Queens. She moved to the Leesburg area in 2010 from Winston Salem, NC where she resided for 16 years. She was a master seamstress and interior designer her entire life, working on commercial and residential projects, and she spent many years with American Drapery in Long Island, NY. Helen was fluent in four languages namely English, Papiamentu, Dutch, and Spanish.  She was accomplished at the art of Crochet and won numerous awards for her works. She shared her love of crochet with countless students over the years. She will be fondly remembered by her friends and family as a fantastic cook and baker, with turkey being one of her specialties. She was a very active person and enjoyed spending time with friends and family and expressing her love of flowers by gardening. She was catholic and was ministered to by the St. Paul’s Catholic Church Eucharistic Team in Leesburg, FL.She was predeceased by her husband – Isaac Martyn; her parents Felix and Dolorita Daantje Henriquez; and three of her children – Edward Anthony Johnson, Elizabeth Castleberry, and Loretta C. Johnson. She leaves to cherish her memory – Son- Anthony A. (Barbara Kelly) Somersall - Queens Village, NY; Daughters – Cynthia E. Pratt – Winston Salem, NC; Sandra (James) Holder-Burwell – Leesburg, FL; and Selma O. Sledge – Stone Mountain, GA; 16 Grandchildren, 25 Great-Grandchildren, and 8 Great-Great GrandchildrenThe family will receive friends at the Page-Theus Funeral Home, 914 West Main Street, Leesburg, Florida From 2:00 – 3:00 P. M. on Sunday March 25, 2012 a celebration of Helen’s life will followat 3:00 P. M.A Mass of Christian Burial will take place 8:30 A. M. - Monday, March 26, 2012 at St. Paul’s Catholic Church in Leesburg, Florida.

Helen N. Martyn age 97 passed away Sunday, March 18, 2012 at the Leesburg Regional Medical Center, Leesburg, Florida. She was born in Mayaguez, Puerto Rico and she was raised in her family’s homeland of Curacao, Netherlands, Antilles. She immigrated... View Obituary & Service Information

The family of Helen N. Martyn created this Life Tributes page to make it easy to share your memories.

Send flowers to the Martyn family.