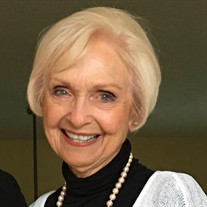 Helen Ware Linden Baker died peacefully May 14, 2020, at The Villages Hospice House, The Villages, FL, after a two-month battle with glioblastoma. She was born February 22, 1934, in Williamstown, KY, to Maidie (née Vallandingham) and Homer Milton Ware on her father’s 40th birthday. She graduated from Williamstown High School in 1952 and considered taking a position as a candy striper in Cincinnati, OH, before heading to Washington, DC, to see what opportunities the nation’s capital had to offer. After settling into city life, she worked as an administrative aid for a US Army office, while also doing some advertising modeling as a sideline. With friends, she embarked on a cruise to Bermuda and met a number of eligible bachelors vying for her attention. One suitor won her over with his singing and guitar playing. That person was William (Bill) Linden, Jr. She and Bill married on June 16, 1956, and resided in an apartment on MacArthur Boulevard in DC until moving to Arlington, VA, where they welcomed into the world their son William E. Linden III on August 21, 1962, and their daughter Elizabeth Ware Linden on November 21, 1964. The Lindens built a house and moved to Herndon, VA, in December 1967 and lived there for 31 years. Helen was a member of the Capital Speakers Club, an organization dedicated to education through the refinement of public speaking. She belonged to Chapter II, serving as chapter president, and as club president. Concurrent with her Capital Speakers Club work, Helen served on the Women’s Board of the American Heart Association, Greater Washington Region, and was active in the Ruth Brewster Chapter of the DC Daughters of the American Revolution. Helen participated in other volunteer work, including a period helping the White House respond to copious amounts of mail delivered during the Reagan Administration. Bill Linden pre-deceased her. While living at Leisure World, Leesburg, VA, she met and fell in love with Richard (Dick) Baker. Their bond strengthened through mutual interests, namely an abiding love and devotion to the Lord Jesus Christ, various ministries (small groups, counseling), dancing, golf, and travel. They married on July 20, 2002. After dividing their time between Northern Virginia and Florida, they moved full-time to The Villages, FL, where they lived for the last five and a half years and were active members at First Baptist Church, Village Park Campus. They also volunteered with Villagers for Trump. In late March 2020, Helen received the diagnosis of a glioblastoma tumor embedded in her brain stem. Aggressive and incurable, the cancer claimed her life on May 14, 2020, at The Villages Hospice House. She leaves behind her devoted and loving husband Dick; children Bill Linden III (wife Linda) of Ashburn, VA, and Libby Linden Rubin (husband Richard) of North Bethesda, MD; grandchildren Hannah Grace Linden, Jacob Andrew Linden, Skylar Blair Linden Rubin, and Carson William Linden Rubin. A Celebration of Life memorial service will be announced at a future date. Arrangements are entrusted to Page-Theus Funeral Home and Cremation Services, Leesburg, FL.

Helen Ware Linden Baker died peacefully May 14, 2020, at The Villages Hospice House, The Villages, FL, after a two-month battle with glioblastoma. She was born February 22, 1934, in Williamstown, KY, to Maidie (née Vallandingham) and Homer... View Obituary & Service Information

The family of Helen Ware Linden Baker created this Life Tributes page to make it easy to share your memories.