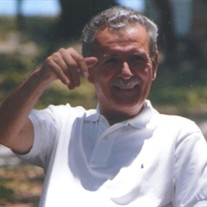 Gerald “Jerry” Luschak age 80 passed away Thursday, December 4, 2014 at the Lane Purcell Hospice House in Sumterville, Florida. Jerry was born in Toronto, Ontario and moved to the Leesburg area 2003 from Pembroke Pines, Florida. His entrepreneurial spirit and natural sales ability took to several careers such as a real estate agent and broker, “house flipper”, and as an outside sales representative for a large pest control company, but his passion for people and making a positive impact on young people led him to his favorite career as a Director of Athletics for a community center in Baltimore, Maryland. For years people would come to Jerry and his family members and relay the deep influence Jerry had on their lives and the lives of their children. He was a talented artist who worked with oil paints as well as charcoal. He will be remembered by those closest to him for his exceptional sense of humor, his strong work ethic, and his intelligence. In recent years he was happiest listening to his pet finches and spending time outdoors admiring the beauty and wildlife that was right out his back door. He will also be remembered by the Royal Highlands Bocce Club for his love of the game and spirited play. He is survived by his wife of 56 years – Pat; Sons – Karl (E. J.) Luschak of Pembroke Pines, FL; and Kevin Luschak of Leesburg; a Daughter – Kimberly Ripley of Seattle, WA; a Brother – Joe Luschak of Bolton, Ontario; and Sisters – Lill (Dick) Betteridge of Corbeil, Ontario; and Stella Stalter of Pompano Beach, FL; and 3 Grandchildren – Josh, Kyle, and Kristin. A celebration of Jerry’s life is planned for 1:00 P. M. - Monday, December 8, 2014 at Page-Theus Funeral Home, Leesburg, Florida, Pastor David Miller will Officiate.

The family of Gerald "Jerry" Luschak created this Life Tributes page to make it easy to share your memories.

Send flowers to the Luschak family.