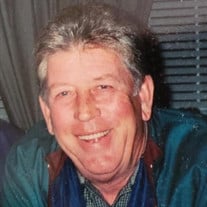 Gerald Sinclair Hayman died May 12th from liver cancer. His last days were spent peacefully at home, surrounded by his family. Gerald was born in Norfolk, Virginia in 1942 to Rebecca and J. G. Hayman. When his father joined the army, his mother moved with Gerald and brother, Emory, back to her family home in Norwood, North Carolina. Gerald grew up there with his beloved grandmother and uncles – his favorite was his namesake, Gerald Thomas (“Getty”) Turner. Gerald’s entrepreneurial career began early – raising rabbits for sale as a teenager. He talked about having to get up early to change their frozen water, and that lesson of hard work served him well through his many business ventures in the future. His sister, Jane, was born when his father returned from WWII. She remembers how Gerald loved to waterski barefoot on Lake Tillery, and how he “wasn’t afraid of anything” – even once feeling around with his feet for a huge copperhead that he shot at (but wasn’t sure if he had hit) off their dock. Gerald received a scholarship to play high school football in at Fork Union Military Academy, until he sustained a knee injury. After college, he entered the Navy. In 1964, while stationed at Naval Air Station Jacksonville, he met Rosemary Plaskett, who was teaching high school in Daytona Beach. They remained in touch as Gerald worked as a contract test pilot in Vietnam. Gerald and Rosemary married in 1971 in West Point, Tennessee. The minister was Rosemary’s cousin, and as it was his first wedding, Gerald had to calm him down before the ceremony. Gerald and Rosemary returned to Norwood and had 2 daughters, Mary and Blair. Gerald was an engine and generator salesman before deciding to start his own company. With his partners, Gerald built a successful business manufacturing and selling generators. Power Technology Southeast grew from humble beginnings in a barn to become a multi-million-dollar company. In 1992, Gerald, Rosemary, and the girls relocated to Leesburg. Gerald and Rosemary worked hard for their family, but also enjoyed traveling together – to Japan and China, and across the western U.S. In 1998, Rosemary died from breast cancer. In 2005, Gerald married Dorothy (“Dottie”) Gray, and became a second father to her children, Robert, Michele, and Chris. A few weeks before their wedding Dottie, teasing, asked if he was nervous about getting married. To which he replied, “Babe, I haven’t been nervous since I was flying over the jungle and my plane ran out of fuel.” After Gerald retired, he and Dottie found more time to travel – across the country in their motor home, playing golf in Mexico, cruising to Alaska, and spending time at their cabin in the Georgia mountains. Never one to slow down, though, he kept busy with real estate and a new business, Elite Electric Vehicles, which imports and distributes golf carts. Gerald loved golf, travel, flying, bird hunting, and boating, and he was always up for a game of cribbage or gin. Gerald was an eternal optimist. As he would say, “the only things in life that really failed, were the ones that you gave up on.” Gerald is survived by his wife, Dottie, his daughters Mary and Blair, stepchildren Robert, Michele, and Chris, and seven grandchildren. A memorial service will be held at Page Theus Funeral Home in Leesburg on June 12, 2021 at 11:30 am, followed by a luncheon at the Leesburg Boat Club. A website has been set up to share memories of Gerald: https:/www.mykeeper.com/profile/GeraldHayman/. In lieu of flowers, the family requests donations in Gerald’s honor be made to Ducks Unlimited or Cornerstone Hospice.

Gerald Sinclair Hayman died May 12th from liver cancer. His last days were spent peacefully at home, surrounded by his family. Gerald was born in Norfolk, Virginia in 1942 to Rebecca and J. G. Hayman. When his father joined the army, his mother... View Obituary & Service Information

The family of Gerald Sinclair Hayman created this Life Tributes page to make it easy to share your memories.

Send flowers to the Hayman family.