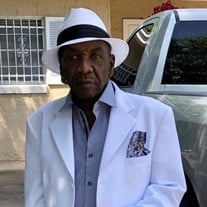 To ensure the health and safety of our community, we are following all guidelines set by local, state and CDC officials. The Memorial Service scheduled will not be open to the public, please respect the family wishes. He was born on July 23, 1950 and at the age of 69 he departed this life on Wednesday, April 29, 2020. He was the only son to Lucian Tisdale and Mary Shaw Tisdale, both preceded him in death. His journey in life began in Kingstree, South Carolina, where he was loved and surrounded by family. He attended Kingstree High School and at the age of eighteen he moved to Leesburg, Florida under the watchful eye of his aunt, Sadie Shaw. George was focused at a young age, and possessed an inward drive to be independent of others despite being a young man. His strong work ethic provided a strong foundation for a good career. He began his work career at Waldon Crate Mill and afterwards the Coca-Cola Company in 1971. There he became a Senior Juice Operator and worked his way to a supervisor position. He earned several awards including Employee of the Month for identifying measurable cost savings and better product outcomes during the juice extraction process. The Coca-Cola company was purchased by Cutrale where he continued as a FRT Processor and later retired with a combined total of over twenty years. As driven as he was, George reentered the workforce by working for Silver Springs Citrus, Inc. He brought a wealth of experience, knowledge, communication, and leadership skills to this organization. George had a charismatic personality. He loved giving advice while also being known for his well dressed appearance and clean cars. He was a blessed man with a loving family and was always excited to hear his children voices which brought him comfort in knowing he was loved. He was a proud grandfather and great-grandfather that looked forward to their growth and promising futures. He leaves to cherish his loving memories a wife: Blanche Tisdale; Children: Demeta Murphy, Alphonso Roberts (Gracie), Tabitha Reid (Jimmie) Florence Crawford (Charles), Breannia Tisdale, George Tisdale, Jr., Ya’brill Tisdale and honorary daughter, Ariel Simmons. Grandchildren: Quiton Tisdale, LaQuandra McCullough, Juwan Tisdale-Reid, Charnelle Little, Shatoria Roberts, Nykei Little (Donnetta), Makayla Reid, and Za’layah Sheppard. Great Grandchildren: Tyson Tisdale, Sanaa Little, Miley Tisdale, and Kylinn Little. He was the only sibling to his beloved sister, Mary Alice Davis (Bernard- deceased) and he made it a priority to foster a strong relationship with all his relatives near and far. Along with a host of nieces, nephews, cousins and sorrowing friends. Arrangements are entrusted to Page-Theus Funeral Home and Cremation Services, Leesburg. The family requests that no flowers be sent to the service. Thank you.

To ensure the health and safety of our community, we are following all guidelines set by local, state and CDC officials. The Memorial Service scheduled will not be open to the public, please respect the family wishes. He was born on July 23,... View Obituary & Service Information

The family of George Junior Tisdale created this Life Tributes page to make it easy to share your memories.

To ensure the health and safety of our community, we are following...

Customized sympathy cards. Mailed for you.