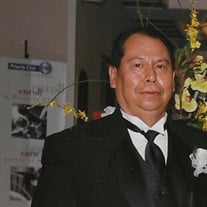 Gonzalez Jr. George, 69, peacefully passed away Sunday, December 24 at Kindred Hospital in Ocala Florida. He was a beloved Father, husband, brother, friend and to many a minister of God. He survived by his 4 children: oldest son David Gonzalez,... View Obituary & Service Information

The family of George Gonzalez Jr. created this Life Tributes page to make it easy to share your memories.

Send flowers to the Gonzalez family.