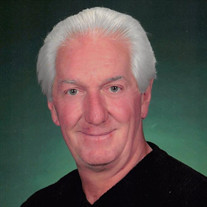 George Anthony Corey, 73, from Leesburg, FL., passed away on June 10, 2020. George was born on February 15, 1947 in Bronx, NY, to the late Benjamin and Anna (Kowatch) Corey. George served his country proudly when he joined the United States Army. He was a hard worker and enjoyed a long career as a Telephone Forman. George was an amazing person, and he had a very interesting life full of wonder and adventure. “George was a quiet man but when he spoke, he said a lot." This was said by one of his dear friends, William Lambert. This phrase sums him up as he was the silent type who watched, and when he was ready to participate and become your friend he was your life. He was the most caring husband, father, son, brother and uncle. He was predeceased by his father Benjamin, his oldest brother Benjamin, and years later his favorite brother-in-law William Luis, then his nephew William Luis Jr. His mother Anna Kowatch passed away in February 2006. George is survived by his loving wife, Delia Corey. In their 37 years they had a wonderful marriage and an amazing adventure that will be treasured for the rest of Delia's life. They traveled to Europe together, South East Asia, Alaska, and cruised to Panama and the Caribbean numerous times. George’s hobbies included hunting, being outdoors. They started out in New York, then Connecticut, and then Monument Colorado, which he absolutely loved. He was wild about the water. They even bought a home in Mexico, which they owned and enjoyed with all their friends for 13 years. Along the way they retired and came to The Plantation of Leesburg, which was his Paradise on Earth. George loved going to the pool every day, and he made so many friends. It appeared at times he was holding court. “George was my husband, my rock, but he also taught me how to be strong and independent and not be afraid of anything” as quoted by Delia describing what a wonderful person George was. He was an amazing person, and will be missed by everyone that knew him. A viewing will be held on Sunday June 14, 2020 from 5:00 PM to 7:00 PM, at Page-Theus Funeral Home in Leesburg, FL, deacon Michael Balchus will be conducting the Prayer Service. On Monday there will be a funeral Mass at St. Paul Catholic Church, at 10:00 AM, Father Martin Nguyen will be officiating. In lieu of flowers please send to the charity of your choice in memory of George Anthony Corey. Arrangements are entrusted to Page-Theus Funeral Home and Cremation Services, Leesburg.

George Anthony Corey, 73, from Leesburg, FL., passed away on June 10, 2020. George was born on February 15, 1947 in Bronx, NY, to the late Benjamin and Anna (Kowatch) Corey. George served his country proudly when he joined the United States... View Obituary & Service Information

The family of George Anthony Corey created this Life Tributes page to make it easy to share your memories.

Send flowers to the Corey family.