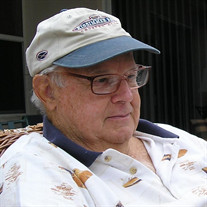 Gene Sterling Hunt September 3, 1935 ~ February 2, 2016 Gene S. Hunt was born on September 3, 1935 in Everett, Massachusetts to Irma B. (Steeves) and Eldon H. Hunt. At age 2 years the Hunt family moved to Saugus, Mass where Gene presided until his marriage in 1960 He graduated from the Saugus school system and studied printing management at Boston University. He was married to Dorine M. (Colley) of Lynn, Mass. and has three beautiful children, Karen Todd of Tunstall, England; David of Rockport, Mass.; and Kathleen of Windam, New Hampshire. Six grandchildren Danyle, Lea, Caitlin, Ryan, Hunter and Cooper. A sister Shirley Hunt of Ogden, Utah. Gene is a veteran of the U.S. Navy. He worked as a printer at Hanscom Air Force Base in Mass and also in Boston, Mass. for the government for 12 years than purchased his own printing business in 1968 in Gloucester, Mass. which he ran, along with his wife, for 32 years. Gene was an avid sports fan having played ice hockey (goalie) in high school, played on amateur teams and coached all star teams for youth hockey for many years. Gene also played softball and golf in Rockport. Gene and his wife were avid skiers having traveled to many states to ski. They were also snowmobilers and golfers for many years. They owned a home on Great East Lake in Maine for over 25 years and loved spending weekends there, year round, enjoying family, friends, boating, water skiing, snowmobiling, and riding his ATV. Gene and his wife retired to Kissimmee, Florida and eventually moved to The Plantation at Leesburg. He will be greatly missed by family, friends and neighbors. Gene and his wife were members of Corpus Christi Episcopal Church in Okahumpka, Florida

The family of Gene Sterling Hunt created this Life Tributes page to make it easy to share your memories.

Send flowers to the Hunt family.